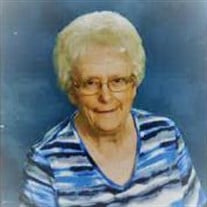 Alice M. Baker, 84, of Frankfort, passed away on February 23, 2022, at Wesley Manor. She was born on October 14, 1937 in Rensselaer, Indiana, raised in Brook, Indiana, and resided most of her life in Anderson. Alice graduated from Brook High School, and earned a Food Service certificate from Michigan State University. She worked for George Ade Hospital in Brook, the Indiana School for the Blind in Indianapolis, and Anderson Community Schools. She married Charles M. Baker of Anderson, and was happily married until his death on September 4th, 1983. She was a member of First United Methodist Church in Anderson, where she was very involved with their youth camp and would cook for various activities. Cooking for youth was one of her favorite things. At every family gathering she would thrill everyone with her homemade cookies, cakes, and candies. She even made up several personal cookbooks for her friends and family. She also started the Widows Club at the church. Alice was very involved in her local Home Economics Club and remained friends with many of the members until her death. Alice is survived by her step-children, Lisa Baker and Nathan Baker; step-grandchildren, Stacey and Stephen Morrison, and Spencer Baker; nieces and nephews; Robert Lane, Susan Knochel, Rita Velasquez, and Thomas Lane, and many special friends. She was preceded in death by her parents, Lloyd and Helen McCarty; husband, Charles M. Baker; sister, Lois Lane, and brother-in-law, Earl Lane. Visitation will be held on Monday, February 28, 2022, from 11:00 am to 1:00 pm at Davis Park, 4507 Nichol Ave, Anderson, IN 46011. Services will follow visitation at 1:00 pm with Rev. Corinne Boruff officiating. Burial will take place in East Maplewood Cemetery. Memorial contributions may be made to Anderson First United Methodist Church. www.loosecares.com.

Alice M. Baker, 84, of Frankfort, passed away on February 23, 2022, at Wesley Manor. She was born on October 14, 1937 in Rensselaer, Indiana, raised in Brook, Indiana, and resided most of her life in Anderson. Alice graduated from Brook High... View Obituary & Service Information

The family of Alice M. Baker created this Life Tributes page to make it easy to share your memories.

Send flowers to the Baker family.