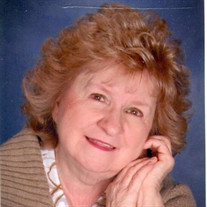 Alice May (Carroll) Deckard, 78, of Pendleton, transitioned to her heavenly home on January 29, 2022 at her home surrounded by her family. She was born on March 15, 1943, in Montgomery Co., Indiana, and resided most of her life in Crawfordsville. She was born to Frank and Mary (Fielden) Carroll and was the youngest of nine children. Her mother died when she was eight resulting in Alice spending a lot of time in the home of her brother, Russell Carroll, and wife, Ida, and eventually moving in with her sister, Mildred Rhoads, and husband, Robert, and their children, Lloyd and Jan. When living in Peoria, IL, she won a contest that led to her naming a lion, King, at the Peoria zoo. Alice graduated from New Ross High School in 1961, and was in numerous clubs, earning a homemaker award. She raised her two daughters, Michelle and Lucinda, while working at Kroger in several positions eventually retiring in 2004. Alice had many friends through her church family at Woodland Heights Christian Church in Crawfordsville and went on several mission trips. She also was a member of a Bunco group, Garden Club, and was involved in her daughter's Camp Fire Girls activities as leader and board member. Alice volunteered at Hanging Rock Christian Assembly and assisted special needs adults with activities and vacations. After retirement, she moved closer to her daughter in the Pendleton area where she was involved in other church activities and the Century and Half club. She would travel often back to Crawfordsville to visit friends. Most importantly, Alice was a devoted mother and grandmother. Alice is survived by her loving daughters, Michelle (Michael) Fisher of Plymouth, MI and Lucinda (Brad) Peterson of Pendleton, IN; grandchildren, Kayla (Lucas) Dollens, John (Angela) Fisher, Andrea (Andrew) Vojtko, and Kiernan Peterson; great-grandchildren, Amberlyn, Lillian, Claire, Artemis, and Alaina. Also, surviving is her sister, Patricia (Lloyd) Young, and several nieces and nephews. She was preceded in death by her parents, and siblings, Edward, Norman, Mildred, Jesse, Russell, Winton, and Wilbur. Family and friends will remember Alice by her sweet smile, cheerful laugh, welcoming arms, and helping personality. There will be a private ceremony and celebration of life at a later date. Memorial contributions may be made to Woodland Heights Christian Church c/o Mission Trips. www.loosecares.com.

Alice May (Carroll) Deckard, 78, of Pendleton, transitioned to her heavenly home on January 29, 2022 at her home surrounded by her family. She was born on March 15, 1943, in Montgomery Co., Indiana, and resided most of her life in Crawfordsville.... View Obituary & Service Information

The family of Alice Mae Deckard created this Life Tributes page to make it easy to share your memories.

Alice May (Carroll) Deckard, 78, of Pendleton, transitioned to...

Send flowers to the Deckard family.