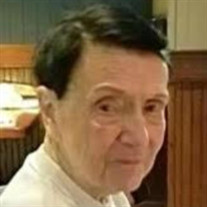 Beverly R Thompson, 96, of Anderson, passed away on December 1, 2021. She was born on October 4, 1925, in Madison Co., Indiana. Beverly graduated from Anderson High School and Indianapolis Barber Academy. She was a homemaker and a Barber... View Obituary & Service Information

The family of Beverly R. Thompson created this Life Tributes page to make it easy to share your memories.

Beverly R Thompson, 96, of Anderson, passed away on December...

Send flowers to the Thompson family.