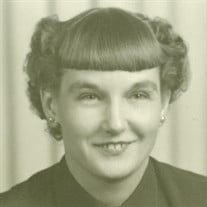 Blanche McGuire, 101, passed away on September 16, 2021, at Keystone Woods Assisted Living Facility. She was born February 14, 1920, in Anderson, and lived all of her life in the Anderson area. Blanche was the daughter of William and Mary West, and they had four sons and three daughters. She was the last living child of the seven children. Blanche attended Anderson High School before going to work for Delco- Remy in the late 1930’s. After giving birth to her only child, William E. Henry on January 23, 1941, she went back to work for Delco-Remy in 1943. She worked for Delco-Remy for 42 1/2 years until her retirement in 1984. She is survived by her special friend, Jean Carpenter; and several nieces and nephews. Blanche and her husband, Bob McGuire, enjoyed 48 years of marriage. Bob passed away on Mach 7, 2015. Blanche and Bob had a wonderful life together. They traveled extensively, trips to Europe, including a trip down the Rhine River, driving thru France and exploring England. They went to Mexico a number of times and Hawaii several times. As Shiner Club members, Bob and Blanche drove to many Shrine Club events in the U.S. and Canada where Bob drove miniature cars in parades. They enjoyed the experience and the comradery of the trips. The members of Bob’s military unit during W.W. II in Europe, held yearly reunions and in the later years, Blanche and Bob assumed responsibility for conducting those reunions. The reunions were originally held in Indianapolis, but as the membership diminished they were held in Anderson. These reunions were a great enjoyment for Blanche and Bob. Blanche and Bob also drove and flew to California to see Blanche's son Bill. Later as Blanche was unable to travel, She talked to Bill on the phone every day. Blanche has enjoyed the friendship of many, many, people and relatives over the years. She regularly talks to many of them on the phone. If they don’t call her, she calls them. We will all miss Blanche, including the friends she made at Keystone Woods Assisted Living Facility. Blanche was a unique person, who was outspoken and independent. One of a kind. Visitation will be held at Loose Funeral Homes & Crematory, 200 West 53rd Street, Anderson, IN, 46013, on Wednesday, September 22, 2021, from 11:00 a.m. until 1:00 p.m. Services will be at the funeral home on Wednesday at 1:00 p.m. with Pastor Bill Fulda officiating. Burial will take place at Anderson Memorial Park Cemetery immediately following the service. Memorial contributions in Blanche's memory, may be made to the charity of the donor's choice. www.loosecares.com.

Blanche McGuire, 101, passed away on September 16, 2021, at Keystone Woods Assisted Living Facility. She was born February 14, 1920, in Anderson, and lived all of her life in the Anderson area. Blanche was the daughter of William and Mary West,... View Obituary & Service Information

The family of Blanche McGuire created this Life Tributes page to make it easy to share your memories.

Send flowers to the McGuire family.