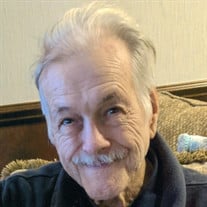 David Dale Carpenter, 80, of Anderson, departed this life to be with his Lord and Savior Jesus Christ on January 24, 2022. David was born and raised in Anderson, IN. He attended Anderson High School, graduating in 1959. David was a member of the football and track team as well as playing the saxophone in the school band. After graduation, he married his former wife and worked as an apprentice tool and die maker, while attending university. He graduated from Ball State University in 1967 with a Bachelor of Science in Business Administration. David was loving, energetic, and full of life and charisma. These gifts enabled him to become a top salesman during his career with Xerox, Kodak, and Finger Corporation. David relocated to New York then Michigan, eventually settling in Houston, Texas. Always desiring to be an entrepreneur, he obtained his Real Estate Brokers License and established Texas Business Marketing in Houston, Texas during the eighties. David was a staunch American patriot and a loyal supporter of the Republican Party. David expressed deep concern with the current state of the union, politics, and issues affecting the "vulnerable". David was so proud to be a native of Anderson and "came home" to reside in 2020. David is survived by his children, David Dale Carpenter, Jr, (spouse, Tricia), of Arlington, Texas, Jennifer Lynn Morris of Anderson, and Audra Sue Carpenter-Brown, (spouse, Brian) of Anderson and sister, Judy Monzelle Carpenter Franklin, (spouse, Gene) of Anderson. David has multiple grandchildren, great-grandchildren, nieces, nephews, and loving friends who will miss him dearly. He was preceded in death by his wife, Debra Ann (Shiner) Carpenter (2002), his son, Aaron Michael Carpenter (2010), daughter, Christina Carpenter; brothers, Gerald Wayne Carpenter and Timothy Grant Carpenter, along with parents, Ruby Monzelle (Smith) Carpenter and Walter Dale Carpenter. Visitation will be held at Loose Funeral Homes and Crematory, 200 West 53rd Street, Anderson from 12:00 pm - 2:00 pm on Sunday, January 30, 2022. The funeral will be held the same day at Meadowbrook Baptist Church, January 30, 2022, at 4:00 pm with Pastor Dennis Zirkle officiating. For memorial contributions in place of flowers, please consider donating to Thorn https://www.thorn.org/donate, an organization dedicated to protecting the "Vulnerable" www.loosecares.com.

David Dale Carpenter, 80, of Anderson, departed this life to be with his Lord and Savior Jesus Christ on January 24, 2022. David was born and raised in Anderson, IN. He attended Anderson High School, graduating in 1959. David was a member... View Obituary & Service Information

The family of David Dale Carpenter created this Life Tributes page to make it easy to share your memories.

David Dale Carpenter, 80, of Anderson, departed this life to...

Send flowers to the Carpenter family.