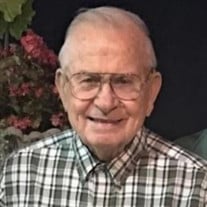 Donald L. Alexander, 87, died on April 21, 2021, at home in Carmel, Indiana, after an extended illness. He was born in Anderson on April 13, 1934, to Wilford F. (Sr.) and Hilda I. (Fuller) Alexander. He was a lifelong resident of Anderson, wintering in Dade City, Florida, with his wife, Shirley. He attended Anderson High School and received several certifications in labor relations from Ball State University. Don exemplified a man with a strong work ethic - delivering papers from age nine to 16. At 17, he was the night manager of Walgreen's soda shop in Danville, Illinois. He began working for General Motors in the 1950s, taking sales and construction jobs during layoffs. With a vision of reducing injustice and improving the lives of factory workers and their families, he held various offices within United Auto Workers Local 663 before being elected president in 1978. Don was a member of the board of directors for Community Hospital, served as a delegate for Fall Creek Township in state political conventions, and was active in the social and philanthropic efforts of his wife's service sorority. He was an active member and held offices in the Del-Rey Toastmasters club, where, in 1972, he gave his first public recitation of 'Twas the Night Before Christmas. His repeated readings of this classic on Christmas Eve were a family tradition for over 40 years. He retired from the Guide Lamp Division of General Motors after nearly 43 years of service. Don's life was full of action and adventure, whether it was boating, gardening, or traveling around the country in an RV with his wife. DIY projects filled any spare time, and he enjoyed the satisfaction they gave him. He loved sports and games and was more frequently a competitor than a spectator. He was a basketball player, football player, bowler, shuffleboard player, and golfer. His interest in games spanned all categories: tabletop and board games-checkers (which he mastered), chess, and dominoes were favorites; card games, where Tripoley and euchre were the games of choice; and lawn games: darts and horseshoes. He was the family champion of croquet, a game which filled many summer evenings. He is survived by his wife of 58 years, Shirley (Leavell), whom he married on Sept. 28, 1963; two brothers, Daniel E. Alexander (Linda) and Merle "Ron" (Ginger) Alexander; his five children, Theresa Best (Steve), Greg Alexander (Julie), Corinne Wright (David), Todd Alexander (Kyle), and Donald "Tim" Alexander (Angel); 10 grandchildren; and 11 great-grandchildren. Don was preceded in death by his parents, Wilford F. (Sr.) and Hilda I. (Fuller) Alexander; brother, Wilford M. "Junior" Alexander; sisters, Sarah "Dee" Ebert, Imogene Rushton, and Charlotte Mills; and two granddaughters, Sandi Best and Amie Alexander. Visitation will be from 2 to 5 p.m. Sunday, April 25, at Loose Funeral Homes & Crematory, 200 W. 53rd St., Anderson. Funeral services will be on Monday, April 26, at 2:30 p.m. at the funeral home, with burial in Anderson Memorial Park Cemetery. Memorial gifts may be made to the Alzheimer's Association, 8430 W. Bryn Mawr Ave., Suite 800, Chicago, IL 60631 (www.alz.org). www.loosecares.com

The family of Donald L. Alexander created this Life Tributes page to make it easy to share your memories.

Send flowers to the Alexander family.