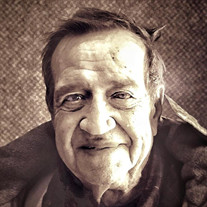 Donald (Cliff) Wiseman died on February 25, 2021. He was the son of Spencer Loran and Cora (Brown) Wiseman and was born September 19, 1937, at St. John’s Hospital in Anderson, IN. He lived most of his life in the Anderson and Middletown area. He was in the Air Force from 1957 to 1961 and among other areas was stationed in Morocco. Cliff retired as a Journeyman Electrician from Delco-Rem in 1987. He was an active member of the Middletown Church of the Nazarene. He was an active Wiseman Family historian and a member of Descendants of Washington Army at Valley Forge serving as adjutant of Indiana Brigade. He was also a member of Descendants of Indiana Pioneers and Descendants of Tennessee Pioneers. Professionally, he was a member of UAW Local 662. While he was raising his family, he was an avid gardener maintaining a very large garden that provided his family with a very wide range of fresh vegetables and fruit during the summer and plenty left over to be canned for use during the long Indiana winter. Cliff enjoyed socializing at the Rangeline Community Center, Oak Street Senior Citizens Center, and UAW 662 Euchre Club. Surviving are his brother Richard Wiseman and three children: Joey Eller of Muncie, Greg Wiseman of New York City, and Heather Karn of Cape Coral, four grandchildren, and three great-grandchildren. He is also survived by his best friend Charlene Martin of Anderson. A funeral for Cliff will be held at Robert D. Loose Funeral Home at 200 W. 53rd Street in Anderson. Visiting hours will be from 9:30 am - 11:30 am Tuesday, March 2, 2021, with funeral services to follow officiated by Rev. Phil Rogers. Burial will be at Anderson Memorial Park. Instead of flowers, it was Cliff’s wish that people make a donation to Salvation Army. Cliff often told about the Christmas gift he received as a young child from the Salvation Army. It was the only Christmas gift he received that year and he hopes donations made in his memory will bring light and maybe even joy into someone else’s life.

Donald (Cliff) Wiseman died on February 25, 2021. He was the son of Spencer Loran and Cora (Brown) Wiseman and was born September 19, 1937, at St. John&#8217;s Hospital in Anderson, IN. He lived most of his life in the Anderson and Middletown... View Obituary & Service Information

The family of Donald Clifford Wiseman created this Life Tributes page to make it easy to share your memories.

Send flowers to the Wiseman family.