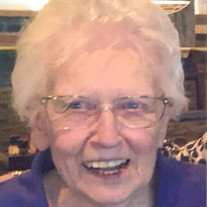 Edna Mae Wilson, age 93, of Anderson, passed peacefully at her home on November 21, 2021. She was born December 2, 1927, in Chicago, Illinois to Frank and Bertha (Johnson) Groth. Edna attended Carl Schurz High School, Chicago, Illinois. While she was employed with Otis Elevator, she met her future husband, Irwin “Jake” Wilson. After relocating to Anderson in 1960, she worked for Everybody’s Oil Petroleum Service, after which she then served as an Office Manager for Atlas Red D Mix for 30 years, before retiring in 2008. Edna touched everyone with her contagious smile and her witty humor. She loved to spend time with her family, her neighborhood friends, shopping, yard work, daily crosswords, playing solitaire, and watching her favorite sports teams. She was an avid sports fan rooting for the Chicago Bears and the Chicago Cubs until the Baltimore Colts moved to Indianapolis, then she transferred her allegiance to the Colts. Edna and sister, Bernice were season ticket holders for many years. They were Indianapolis Colts Fan Club members traveling to out of state games. She is survived by her daughter, Laura (Rod) Sexton, grandchildren Jon Sexton (Hannah Plue) and Ashley Sexton (Evan Haas.) Her great-grandchildren, Shelby Sexton, Khloe Sexton, Bentley Sexton and Ellie Haas. Nephews Fred (Diane) Groth, Garry Groth, and Brian Groth. Great-nephew and nieces, Andrew Groth, Christinia Groth and Kimberly Groth. She is also survived by her four-legged friend, Milo. She is preceded in death by her parents, brother Fred Groth, Sr. and sister Bernice Groth. Private graveside services will be held at 1:00 p.m. on Friday, November 26th at Anderson Memorial Park Cemetery. Memorial contributions may be made to Madison County Humane Society. www.loosecares.com.

The family of Edna Mae Wilson created this Life Tributes page to make it easy to share your memories.

Edna Mae Wilson, age 93, of Anderson, passed peacefully at her...

Send flowers to the Wilson family.