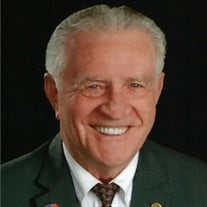 Elbert Eugene “Gene” Heath, 86, a long-time resident of Anderson, Indiana, passed away on July 8, 2021, due to complications from leukemia. He passed away peacefully with his children by his side. Gene was born on July 24, 1934, in Cross Plains, Indiana to Harold and Elsie (Haskell) Heath. He married the love of his life, Alice (Wiley) Heath, on November 25, 1956, in Florence, Indiana. They were married for over 62 years until her passing in February 2019. Gene and Alice had three children together who survive him: Terry Heath, of Zephyrhills, Florida, Tamera (Ronald) Veverka, of Brookville, Ohio, and Timothy (Terri) Heath, of Anderson, Indiana. He is also survived by six grandchildren, three great-grandchildren, and many nephews and nieces. In addition to Alice, he was preceded in death by his parents, three brothers, and two sisters. Gene was a proud veteran of the U.S. Army. He loved traveling the world with Alice. He enjoyed camping, bird watching, fishing, riding motorcycles, playing cards and Aggravation, woodworking, and the Cincinnati Reds. He was a huge supporter of the Highland High School Band and was involved in Boy Scout leadership and 4-H Model Rocketry. Family meant everything to Gene, and he was so proud of them. Gene retired from Delco Remy in Anderson after 38 years of dedicated service. While working at Delco Remy, he also drove a school bus and worked at Newby’s Implement Service. Gene had an amazing work ethic and had an infectious smile to go along with his wonderful sense of humor. He was a good friend to many. Gene was immensely proud of the many years he worked as a volunteer at Community Hospital Anderson and Community Cancer Center Anderson. He was a member of the First Baptist Church in Anderson. Services will be held at Loose Funeral Homes & Crematory, 200 W. 53rd Street, Anderson, on Saturday, July 17 at 2:30 P.M., with visitation from 12:30 - 2:30 P.M. Burial will follow in East Maplewood Cemetery with military honors. Memorial contributions can be made to First Baptist Church, 907 N. Raible Avenue, Anderson, IN 46011. www.loosecares.com

The family of Elbert Eugene "Gene" Heath created this Life Tributes page to make it easy to share your memories.

Send flowers to the Heath family.