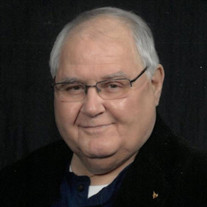 George "Butch" Peters, 74, Anderson, passed away April 21, 2022, at Ascension St. Vincent Hospital - Anderson. He was born July 6, 1947, the son of Theodore and Eunice (Faulk) Peters. Butch graduated from Madison Heights High School in 1965. He then enlisted and served proudly in the U.S. Army. Butch retired from Delphi Corporation in 2001 after 37 years of service. He then worked as a security guard at Keystone at the Crossing Mall in Indianapolis. He was a member of Fall Creek Christian Church. Butch was preceded in death by his parents, his twin brother, Edward "Buddy" Peters, his sister, Susan Faulkner, and his first wife, Betty Peters in 1984. He is survived by his wife of 37 years, Becky Peters; his children, Greg Carpenter (Stacey), Amy Belden (Ryan), Shelli Albright (Greg), and Carrie Johnson (Dustin); his grandchildren, Meghan, Jacob, Noah, Jonathan, Mikayla, David, Isaac, Chloe, and Aaron; his sister, Cheryl Smiley (Matt); several nieces and nephews; many special friends; and his canine companion "Gabby". The family would like to thank Dr. David Mares for his compassionate care. Funeral services will be on Tuesday, April 26, at 1:00 P.M. at Loose Funeral Homes & Crematory, 200 W. 53rd Street, Anderson, with Pastor Tom Wiles and Pastor Andrew Hodges officiating. Visitation will be from 10:00 A.M. - 1:00 P.M. Burial will be in Anderson Memorial Park Cemetery. Memorial contributions may be made to the American Lung Association or the American Heart Association. Condolences may be shared with the Peters Family online at www.LooseCares.com.

The family of George "Butch" Peters created this Life Tributes page to make it easy to share your memories.

Send flowers to the Peters family.