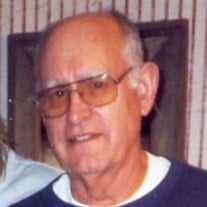 George N. Scott, 90, Anderson, passed away on March 15, 2021, at St. Vincent Hospital in Anderson. He was born in Burkesville, KY on August 10, 1930, into a loving large family. He moved to Indiana in his early 20's for employment. George married Emma Garrett, and they had two children, four grandsons and, two great-grandchildren. George was a kind, loving and hard-working man. He had a good sense of humor and there was a lot of laughter in our family. His family was the most important thing in his life. After retiring from G.M. Delco Remy, he spent a lot of time with his grandsons. He always said, "Those were the happiest times in his life." He built many homes. George also enjoyed gardening, along with building, remodeling and, working with his hands. He loved being outside watching nature. George was preceded in death by his parents, Emmit and Lydia Scott, several brothers and sisters, his wife, Emma, his son, Rodney Jay Scott, and also an infant grandson, Nathan. He is survived by his daughter, Jody (Rick) Ratz; his grandsons, Colton and Brett Ratz, Tennessee; Corey (Michelle) Scott and Chase (Valerie) Scott, Noblesville, IN. Also, surviving are two precious great-grandchildren, Arianna Grace and Talon Garrett Scott; special family, Lisa (Brian) Bauman, Lafayette, IN; his sister-in-law, Roberta Glotzbach (R. A. Riley); his sister, Wiladean Sparks; his brother, Bobby Scott; and several nieces and nephews. A special thank you to the family members who have taken great care of him over the last few years: Roberta, Tim Gladney, Jeff, Jamie, and Dave, and also special friends through the years, Frank and Janet Tuckerman, as well as Bill and Judy Bauman for always being so kind. A very special heartfelt thank you to his family of caregivers, Tim Gladney, Roberta "Sap", and Johnny A. and Anita are his neighbors who became his family. We created our own village of loving care for him in his own home. He'll be deeply missed and always loved. George gave everyone who knew him kindness. The family would also like to thank the health care workers at St.Vincent Hospital Anderson for their special care. A graveside service will be held on Saturday, March 20 at 2 PM at Bronnenberg Cemetery. COVID-19 precautions will be observed and all attendees are asked to wear masks and social distance. Memorial contributions may be made to the Alzheimer's Association of Indiana, 50 E. 91st Street, Suite 100, Indianapolis, IN 46240. Arrangements have been entrusted to Loose Funeral Homes & Crematory. www.loosecares.com

George N. Scott, 90, Anderson, passed away on March 15, 2021, at St. Vincent Hospital in Anderson. He was born in Burkesville, KY on August 10, 1930, into a loving large family. He moved to Indiana in his early 20's for employment. George... View Obituary & Service Information

The family of George N. Scott created this Life Tributes page to make it easy to share your memories.

Send flowers to the Scott family.