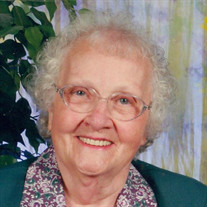 Golda E. Pool, 93, of Anderson, passed away on November 5, 2021, at Countryside Manor Health and Living Community Anderson, IN. She was born on October 17, 1928, in Cumberland County, Kentucky. She retired in 1993 from Brookside Corporation... View Obituary & Service Information

The family of Golda E. Pool created this Life Tributes page to make it easy to share your memories.

Send flowers to the Pool family.