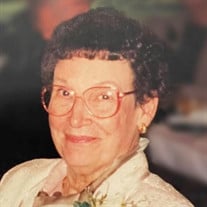 Helen F. Voight, 96, of Anderson, passed away on January 31, 2021, at Community Hospital of Anderson, IN. She was born on February 27, 1924, in Centerville, Illinois, the daughter of Miles Ernest and Veda (Johnson) Funkhouser. Helen graduated from Fairfield High School, Fairfield, IL at the age of 15 and was the class valedictorian. In June of 1943 Helen and Gene Voight were married and celebrated 50 years of marriage. Helen was employed as a secretary at the Anderson Federation of Teachers and retired after 23 years of service. Helen enjoyed music and played the organ or the piano by ear and still played even in her nineties. She was a formerly a member for many years of the Kingston Avenue Baptist Church. Helen is survived by her daughter, Virginia “Ginny” (Tom) Kingery; grandchildren, Joseph E. Carney, Benjamin Carney, Becca (Ryan) Haviza, Trisha (Charlie) Hudson, and Kristi (Morris Burkes), two step-grandchildren, Tyler (Carly) Kingery, and Drew (Brooke) Kingery, nine great-grandchildren, one brother, Ivan Funkhouser, a son-in-law, David Bosard, and several nieces and nephews. She was preceded in death by her parents; husband, Eldred E. “Gene” Voight, daughter, Regina “Gina” Bosard, and siblings, Charles Funkhouser, Robert Funkhouser, and Irma (Buford) Williams. A Celebration of Life will be held at a later date. Burial will take place at East Maplewood Cemetery. In lieu of flowers, memorial contributions may be made to Youth Serving Christ, 1010 West 8th Street, Anderson, IN 46015. The family would like to extend its sincere thanks to the devoted staff of Keystone Woods for their constant and compassionate care of Helen during her extended stay.

Helen F. Voight, 96, of Anderson, passed away on January 31, 2021, at Community Hospital of Anderson, IN. She was born on February 27, 1924, in Centerville, Illinois, the daughter of Miles Ernest and Veda (Johnson) Funkhouser. Helen graduated... View Obituary & Service Information

The family of Helen F. Voight created this Life Tributes page to make it easy to share your memories.

Send flowers to the Voight family.