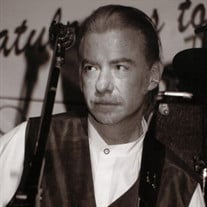 Henry C. "Chief" Connelly, 63, of Anderson, passed away on October 2, 2021, at the Select Specialty Hospital Indianapolis. He was born on March 21, 1958, in Anderson to James and Ora (Tipton) Connelly. Henry graduated from Highland High School, where he was a drum major, in 1976. Following graduation, Henry enlisted in the United States Navy and graduated from the Armed Forces School of Music, Norfolk, VA. In his 22 years in the Navy, Henry traveled and lived in places such as Newport, RI, Virginia Beach, VA, New Orleans, LA, the Great Lakes Region of Illinois, and was dedicated to music both in the Navy and outside of it. Henry had the honor of conducting at the White House. After Henry retired, he became a large part of the Central Indiana music scene. Henry played in many area bands, including PowerTrain, the Gene Deer Blues Band, Nuthin' Fancy, and many more. He was preceded in death by his parents, his siblings, Jim Connelly, Mary Jane Connelly, and Julie Connelly, and his nephew, John Robertson. Henry is survived by his wife, Sharon, Anderson; his daughters, Sara Hawk (Gary), Anderson, and Jean Connelly, Anderson; his step-son, Kaleb Giddens (Rachael), Anderson; his grandchildren, Levi, Ian, Jaspar, Lillie, Karson, and Quinn; and his niece Cassandra Robertson (Brett), Anderson; and his nephew, Shiloh Robertson (Karley), Anderson; and numerous nieces, nephews, and many long-time friends. Visitation will be on Friday, October 8 from 1:00 - 4:00 P.M. at Loose Funeral Homes & Crematory, 200 W. 53rd Street, Anderson, with a celebration of life service at 4:00 P.M. Memorial contributions may be made to the Indiana Special Olympics of Madison County. www.loosecares.com.

Henry C. "Chief" Connelly, 63, of Anderson, passed away on October 2, 2021, at the Select Specialty Hospital Indianapolis. He was born on March 21, 1958, in Anderson to James and Ora (Tipton) Connelly. Henry graduated from Highland High School,... View Obituary & Service Information

The family of Henry C. "Chief" Connelly created this Life Tributes page to make it easy to share your memories.

Henry C. &quot;Chief&quot; Connelly, 63, of Anderson, passed away on October...

Send flowers to the Connelly family.