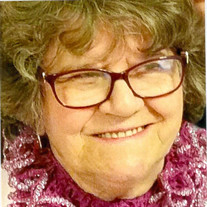 Irma L Barber, 92, passed away on May 30, 2021, at Keystone Woods Assisted Living. Irma was born on April 6, 1929, to Ethel Hull Noland and William Charles Noland. Her birth took place on a farm south of Markleville, Indiana, and then she was raised on the family farm just outside of Markleville. Irma graduated from Markleville High School in 1947. She participated in many school activities and was a member of the high school band. After graduation, she immediately went to work at Eastside Dairy at their 10th Street and Central location. Irma met her husband to be, Harold Barber, in April 1949. They married on August 7, 1949. Harold and Irma had three daughters. After raising her family, Irma began working at J. C. Penney Company. She also spent many working years at American Federal Savings and Loan. Irma concluded her working years at Citizen's Banking Company. Irma was an active participant in her community. She served as an officer for the Rangeline Senior Citizen's Center for many years and was an active member of the local AARP. Irma was preceded in death by her husband, Harold Barber, her daughter, Marcia K. Barber, her parents, Ethel and Charlie Noland, and her brother, William Stanford Noland. Irma is survived by her two daughters, Vickie J. Riggins of Anderson, and Karen Bailey Julian (Gary) of Anderson; her grandchildren, Bryan E. Bailey (Tailor) of Danville, CA, and Jaami M. Bailey (Cory) of Anderson; and her great-grandchildren, Kylee, Brock, Tyler, Carder, Sofia, and Olivia. She also leaves behind several nieces, nephews, and cousins who live both locally and out of state. Visitation will be held on Saturday, June 5, 2021, from 10: 00 am - 1:00 pm at Loose Funeral Homes & Crematory, Anderson, IN. Services will be at 1:00 pm, Saturday, June 5, 2021, at the funeral home with Rev. Ned Clark officiating. Burial will take place in the Anderson Memorial Park Cemetery. Monetary contributions may be made to the American Cancer Society. www.loosecares.com.

Irma L Barber, 92, passed away on May 30, 2021, at Keystone Woods Assisted Living. Irma was born on April 6, 1929, to Ethel Hull Noland and William Charles Noland. Her birth took place on a farm south of Markleville, Indiana, and then she... View Obituary & Service Information

The family of Irma Barber created this Life Tributes page to make it easy to share your memories.

Send flowers to the Barber family.