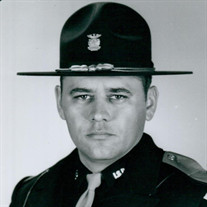 Jack R. Appleby, 87, Anderson, passed away on June 3, 2022, following an extended illness. Jack was born on April 25, 1935, in Anderson, IN, the son of Gladys (Disbennett) Appleby. He graduated from Anderson High School in 1953. At the age of 15, he was employed by a local funeral home, and at 20 years of age joined the Indiana State Police Department as Weigh Clerk. In 1956, upon graduating from the Indiana State Police Academy at IU, he was assigned to the Pendleton ISP Post as a state trooper. Later, he volunteered to transfer to the Redkey ISP Post and was assigned to Delaware County. There he met his wife, Barbara “Bobbi” Appleby, and they were married in the Redkey Methodist Church on December 21, 1956. In 1966, Jack transferred back to the Pendleton Post as a trooper and was eventually promoted to Detective/Sergeant and was the investigating officer of many cases until his retirement in 1980. He was also an accomplished electrician and worked for Acme Paving as plant superintendent, and later for Reflectix Inc. of Markleville as an industrial electrician, where he designed and built the electrical control systems for their machinery. Later, Jack was employed by the Madison County Sheriff’s Department as a special deputy assigned to security at the Government Center for 15 years. Jack also held a private pilot license and loved flying as a hobby. He is survived by his wife of 65 years, Barbara (Saine) Appleby; his two children, daughter, Vicki R. Appleby, and son, Michael R. Appleby; his two granddaughters, Aimee (Brent) Flatt, and Jennifer Boyett; and his four great-grandchildren, Nathan Kuznicki, William McGregor, Elizabeth McGregor, and Vanessa Flatt. He is also survived by his brother, Brooke D. (Jacquelyn) Appleby of Florida, and several nieces and nephews. Jack was preceded in death by his mother, his sister, Linda Busby, and his step-father, Brooke Appleby. Our family would like to express special thanks to Jack’s brother and sister-in-law, Brooke and Jackie Appleby, and also to our nephews/cousins, Bret and Randy Busby for all of their help and support during this difficult time. Our sincere gratitude goes out to the nurses and employees of Elwood Health and Living for the excellent care given to Jack during his stay at this facility. Services will be held on Thursday, June 9 at 4:00 P.M. at Loose Funeral Homes & Crematory, 200 W. 53rd Street, Anderson, with Mr. Mike Adams officiating. Visitation will be from 1:00 P.M. – 4:00 P.M. at the funeral home. A private graveside service will be held at a later date at East Maplewood Cemetery. Memorial contributions may be made to the Parkinson’s Foundation (www.parkinson.org). Messages of condolence may be shared with the Appleby Family online at www.LooseCares.com.

Jack R. Appleby, 87, Anderson, passed away on June 3, 2022, following an extended illness. Jack was born on April 25, 1935, in Anderson, IN, the son of Gladys (Disbennett) Appleby. He graduated from Anderson High School in 1953. At the age... View Obituary & Service Information

The family of Jack Raouel Appleby created this Life Tributes page to make it easy to share your memories.

Send flowers to the Appleby family.