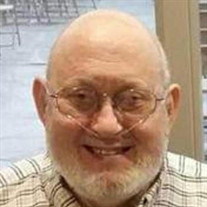 James Alan "Jim" Reed, 77, of Anderson, passed away on April 10, 2021, in Anderson. He was born November 9, 1943, in Anderson to C. Hadley and Mildred (Stafford) Reed. Jim graduated from Anderson High School and attended Ball State University. He was a veteran of the United States Air Force, having served in the Vietnam War, and was also a member of the Indiana National Guard. He retired from General Motors in 1995 after 30 years of service. After retirement, Jim became part of the security team at The Paramount Theatre in Anderson. Jim was an avid collector of coins and other relics. He loved spending time with his family. He was preceded in death by his parents and his sister, Carolyn Reed. Jim is survived by his wife of 49 years, Georginna Reed, Anderson; his daughter, Jamie Sierra, Anderson; his grandchildren, Kaitlin, Ashton, and Javier; and numerous nieces, nephews, and special friends. Visitation will be held on Wednesday, April 14 from 2:00-4:00 P.M. at Loose Funeral Homes & Crematory, 200 W. 53rd Street, Anderson, followed by a service at 4:00 P.M. with Pastor Gary Klinger and Pastor Garri George officiating. Burial will be at a later date at Anderson Memorial Park Cemetery. Memorial gifts may be made to Youth Serving Christ Ministries (East Central Indiana Youth Serving Christ), P.O. Box 123, Anderson, IN 46015 or Anderson First Church of the Nazarene, 2324 Jackson Street, Anderson, IN 46016. www.loosecares.com.

The family of James Alan "Jim" Reed created this Life Tributes page to make it easy to share your memories.

Send flowers to the Reed family.