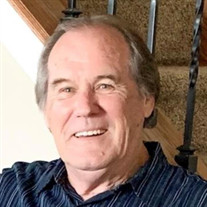 James V. Stevens, 75, of Anderson, passed away on May 28, 2021, at his residence after a long and brave battle with pancreatic cancer. He was born August 31, 1945, in Carthage, IN, the son of the late Carroll and Ima Jean (Howard) Stevens. Jim was a 1963 graduate of Carthage High School. He retired from the Delco-Remy Division of General Motors after 34 years of service. Jim was a member of U.A.W. 662. He had owned and operated Mounds Auto Sales and was an avid car enthusiast and "gearhead." Jim always loved the challenge of fixing things himself. He liked to refer to himself as a "jack of all trades and a master of none." From participating at the Muncie Dragway during his younger years to rebuilding classics, and finally owning his "dream cars" later in life, one of his favorite past-times was his weekend drives in his corvettes. Jim enjoyed yard work and spending as much time as he could with his grandchildren. He also enjoyed NASCAR, nature shows, and was an avid Colts fan. He is survived by his loving wife of 47 years, Diana (Egan) Stevens; daughter, Kristina Emigh; son, Chad (Alicia) Stevens; 8 grandchildren, Makenna and Madison Emigh, Alivia, Aubrey, Conner, and Ashlynn Stevens, Chelsie Welty, and Jason Boles; brother, Tom (Tressie) Stevens; sister, Janet Theobald; sister-in-law, Marsha (Paul) Thayer, and brother-in-law, Steve (Marcela) Egan; and several nieces and nephews. Jim was preceded in death by his parents; daughter, Jama Jo Stevens; sister and brother-in-law, Barbara and David Craig; and brother-in-law, Robert Theobald. Visitation will be held at Loose Funeral Homes & Crematory, 200 West 53rd Street, Anderson, IN 46013, on Thursday, June 3, 2021, from 11:00 a.m. until 1:00 p.m. Services will be at the funeral home at 1:00 p.m. on Thursday with Rev. Jerome Bell officiating. Cremation will take place following the service. The family would like to extend a special thank you to Dr. Eddy and his staff and Jim's many friends and neighbors for their ongoing thoughts and prayers during Jim's illness. In lieu of flowers, memorial contributions may be made to Pancreatic Cancer Research through the funeral home. www.loosecares.com.

James V. Stevens, 75, of Anderson, passed away on May 28, 2021, at his residence after a long and brave battle with pancreatic cancer. He was born August 31, 1945, in Carthage, IN, the son of the late Carroll and Ima Jean (Howard) Stevens. Jim... View Obituary & Service Information

The family of James V. Stevens created this Life Tributes page to make it easy to share your memories.

Send flowers to the Stevens family.