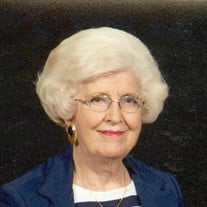 Jeanne Evelyn Cox Judd died at home on April 14, 2021. Born April 6, 1923, in Madison County, she was the daughter of Ira and Mary Stanley Cox. She lived in the Anderson area all her life till she moved to Elkhart in 2008 to reside with her daughter, Marcia Fites. Jeanne graduated from Pendleton High School in 1941 as salutatorian of her class and also received the DAR award. She then attended Ball State University before working as staff secretary for 33 years at General Motors. She married William Judd on July 10, 1943. She was a member of the First Presbyterian Church in Anderson since 1954, serving as deacon and member of the Missions Committed, plus numerous other church activities. She was named Woman of the Year by the Presbyterian Women in 2001. One of her proudest accomplishments was being the liaison between her church and the Christian Center in Anderson for 15 years, working in their resale shop. Jeanne especially enjoyed Nikophelia Club, which she shared with 30 of her most cherished friends. She was a member of the Tri Kappa Sorority before joining the Gamma Associate Chapter in 2003. For 30 years, she attended Clowes Hall Women in Indianapolis and Lady Elks in Anderson. She was a member of Town and Gown at Anderson University and the Victoria Guild at the St. Vincent Anderson Regional Hospital. She enjoyed activities at the Paramount Theater and had season tickets to Main Stage every year. Every Friday night for over 20 years, Jeanne dined with a group of ladies who were like sisters to her. An avid sports fan, Jeanne had season tickets to the Anderson High School basketball games for over 50 years and Indianapolis Colts tickets for three years. She also followed NASCAR's Jeff Gordon and Jimmy Johnson, Indiana University basketball, and Notre Dame football. Surviving is her daughter, Marcia Lee Judd Fites, and cousins, Diane Robinson and Kelly Stanley of Muncie, and Joyce Davis of Indianapolis. Her husband, William Judd, parents, Ira and Mary Cox, and her son-in-law, David Fites preceded her in death. Special thanks to Grace Hospice of South Bend, especially Dana Hankins, Tara Jackson, and Haley Dunn. They went above and beyond with their compassionate care, love, and reassurance during our time of need. In lieu of flowers, memorial contributions may be made to the First Presbyterian Church, 230 West Ninth Street, Anderson, IN 46016, or Anderson Christian Center, 625 Main Street, Anderson, IN 46016. A service will be held at the chapel at Anderson Memorial Park Cemetery on Thursday, April 22, 2021, at 2:00 pm with Rev. Kevin Bausman officiating. The family will receive friends one hour prior to the service. www.LooseCares.com

Jeanne Evelyn Cox Judd died at home on April 14, 2021. Born April 6, 1923, in Madison County, she was the daughter of Ira and Mary Stanley Cox. She lived in the Anderson area all her life till she moved to Elkhart in 2008 to reside with her... View Obituary & Service Information

The family of Jeanne Evelyn Cox Judd created this Life Tributes page to make it easy to share your memories.