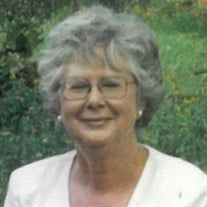 Joan Kay Patterson, (maiden name, Joan Kay Gilbert), died peacefully in the presence of her beloved family in Anderson, IN on February 17, 2022. Born in Anderson on February 18, 1940, Joan is survived by her loving husband, Dick Patterson, her son, Rick Patterson (daughter-in-law, April Patterson, granddaughter, Ripley and grandson, Dylan), daughter Rebecca Patterson (son-in-law Seth Kramer), step-son, Mike Patterson, brother, David Gilbert (sister-in-law Kay), sister, Marjory Spaulding, niece, Amy, and her church family. Valiantly battling Motor Neuron Disease in her latter days Joan remained until her last day, kind-hearted, strong in faith, and razor-sharp in her mind. Class valedictorian of Anderson High School in 1958, Joan would go on to repeat this feat in 2011 as a 71-year-old curve-wrecking college student at Ivy Tech Community College of Indiana. Joan served as an executive secretary in the intervening years at Delco Remy, Magnequench, and the Anderson Church of God Board of Missions. She cherished her church family at Calvary Baptist Church where she served as pianist and in various leadership and educational roles. Joan read voraciously, engaged in card and board games competitively, and was at her happiest in the presence of her family. She is loved and missed by many, and as the last line in Psalm 23 she has gone to "dwell in the house of the Lord." Service will be on Wednesday, February 23, at 1:00 P.M. at Loose Funeral Home & Crematory, 200 W. 53rd Street, Anderson, with Pastor James Proctor officiating. Visitation will be on Wednesday from 11:00 A.M. - 1:00 P.M. at the funeral home. Burial will be in Anderson Memorial Park. In lieu of flowers, Joan believed in supporting the mission of Doctors Without Borders (doctorswithoutborders.org). Online condolences may be shared at www.loosecares.com

Joan Kay Patterson, (maiden name, Joan Kay Gilbert), died peacefully in the presence of her beloved family in Anderson, IN on February 17, 2022. Born in Anderson on February 18, 1940, Joan is survived by her loving husband, Dick Patterson,... View Obituary & Service Information

The family of Joan Kay Patterson created this Life Tributes page to make it easy to share your memories.

Send flowers to the Patterson family.