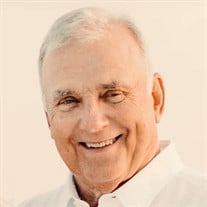 John N. Broughton, 74, of Pendleton, IN, passed away on May 11, 2021. He was born on June 2, 1946, in Erlanger, KY to John and Thelma Broughton. John graduated from Lawrenceburg High School in 1964. He served in the U.S. Navy from 1966-1970. John then graduated from Indiana University in 1973. In 1974, John started as an assistant football coach at Pendleton Heights High School. From 1976-2015, John was the head football coach of Pendleton Heights with a record of 226-186. In 1986, he became the school's athletic director. Coach Broughton retired following the 2015-2016 school year after 44 years of total coaching experience. His career coaching honors include being awarded 10 times the Hoosier Heritage Conference Coach of the Year; under his leadership, the Arabians won conference eight times, and had two unbeaten regular seasons in 1989 and 1998, as well as winning sectionals in 2010 and 2011; in 1990 he was the Indiana South All-Star Game head coach; he was the Indianapolis Colts Coach of the Week in 2011; and Coach Broughton coached 33 All-State players and 10 North-South All-Stars. In 2016, Pendleton Heights High School named the football field Broughton Field in his honor. On October 4, 2019, John was inducted into the Indiana Football Hall of Fame in a ceremony that took place on Broughton Field. He was also a member of the Region 8 Indiana Football Coaches Association. In addition to high school coaching and athletics, John was a member of Holy Spirit Parish at Geist Catholic Church, the Knights of Columbus, and the American Legion. On August 29, 1970, he married Connie (Robinson) Broughton, who survives. He is also survived by his children, Matt Broughton (Wendy), Carmel, IN and Stephanie Azzaro (Mike), Chatham, NJ; his grandchildren, Sophia and Olivia Azzaro, and Lucy and Annie Broughton; his four sisters; and numerous nieces and nephews. He was preceded in death by his parents. Visitation will be on Sunday, May 16 from 2-5 PM at Broughton Field at Pendleton Heights High School (in the event of inclement weather, visitation will be in the Pendleton Heights High School Activity Center), where attendees are encouraged to wear the Pendleton Heights colors of forest green and white, or the colors of Indiana University, red and white. A Mass of Christian Burial will be on Monday, May 17 at 11:00 AM at Holy Spirit Parish at Geist Catholic Church, 10350 Glaser Way, Fishers, IN. Burial will follow in Grovelawn Cemetery in Pendleton. In lieu of flowers, donations in memory of Mr. Broughton should be directed to the South Madison Community Foundation, where a new fund bearing his name will benefit the students of Pendleton Heights High School (www.southmadisonfoundation.org/online-donation). Arrangements have been entrusted to Loose Funeral Homes & Crematory. www.loosecares.com

The family of John N. Broughton created this Life Tributes page to make it easy to share your memories.

Send flowers to the Broughton family.