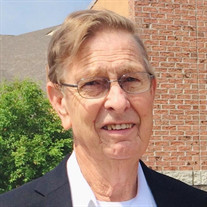 John William Browning, 77, of Frankton, went to be with the Lord surrounded by his family after an extended illness on May 11, 2021. He was born on October 22, 1943, in Seymour, Indiana, and resided most of his life in Frankton. John graduated from Tipton High School in 1961. He worked his entire career in the construction industry and for a time he owned and operated his own construction company with his brother, J & R Browning, Inc., He worked the majority of his career for W.R. Dunkin and Son, Inc., and he retired as their Vice President of Operations. He began his career with W.R. Dunkin as a young man, and one his most memorable moments was setting the steeple on the First United Methodist Church in Anderson. John left his mark on the City of Anderson overseeing many landmark building projects including the Kardatzke Wellness Center and York Performance Hall at Anderson University, many of the buildings surrounding the St. Vincent Anderson campus, and several facilities for Anderson Community School Corporation. He attended Northview Church in Anderson, liked woodworking, gardening, and working with his hands, but most importantly he loved to spend time with his family. John was a man of integrity and strong in his faith. He is survived by his loving wife of 57 years, Darlene (Bearry) Browning; children, Allan (Beth) Browning, Ronda Harter, Paul (Lori) Browning, and Julia (Keith) Shoemaker; grandchildren, Stephanie (Alex) Cook, Jeffrey (Leesa) Browning, Andrew (Anna) Browning, Anthony Browning, Ryan (Rachel) Harter, Amanda (Jay) Smith, Matthew (Taylor) Harter, Nicolas Harter, Katelyn Browning, Zachary Browning, Abigail Browning, Alaina Shoemaker, and Nathanael Shoemaker; and 11 great-grandchildren. Also, surviving is his sister-in-law, Barb Browning; and several other in-laws, nieces, nephews, and cousins. He was preceded in death by his parents, Maurice and Ruth Browning; and siblings, Robert Browning, Martha Rager, and Richard Browning. The family would like to extended a special thank you to all of the doctors and nurses for all their love and care of John. Visitation will be held Sunday, May 16, 2021, 2:00 pm - 6:00 pm at Loose Funeral Homes & Crematory, 200 West 53rd Street Anderson, IN. Services will be Monday, May 17, 2021, 2:30 pm at the funeral home with Pastor Nate Nupanga officiating. Burial will take place in the K of P, I.O.O.F. Cemetery in Frankton. Memorial contributions may be made to The Christian Center in Anderson. www.loosecares.com.

John William Browning, 77, of Frankton, went to be with the Lord surrounded by his family after an extended illness on May 11, 2021. He was born on October 22, 1943, in Seymour, Indiana, and resided most of his life in Frankton. John graduated... View Obituary & Service Information

The family of John William Browning created this Life Tributes page to make it easy to share your memories.

John William Browning, 77, of Frankton, went to be with the Lord...

Send flowers to the Browning family.