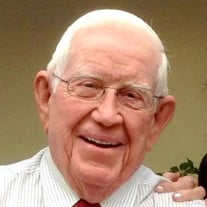 John K. Summers of Bonita Springs, Florida entered his heavenly home on Tuesday, May 18th, 2020. He was born May 7th, 1924, in Phlox, Indiana to John W. and Nellie Summers. John graduated from Union Township High School in 1942 (Howard County, IN). He enlisted in the U.S. Naval Service and was stationed in Memphis, Tennessee. Once John’s active duty was complete, he returned to Indiana and attended Union Bible Seminary. John then embarked on his initial Crusade for Christ, beginning in Jamestown, Kentucky, preaching from a car equipped with a loudspeaker and holding nightly revival meetings. He spent nearly two years ministering at various places in Russell County, Kentucky including Temple Hill and Long Bottom, both along the Cumberland River. John then returned to Anderson, Indiana to attend Great Commission Bible Institute. While John was at Great Commission, he met his future wife, Betty Mae Freeman. They married on June 8th, 1951 at Lapel Methodist Church and soon after began a life of ministry, first serving 43 years at Ovid Community Church in Anderson, Indiana, another 10 years at Albany Christian Church in Albany, Indiana, and then several more years at Covenant Presbyterian in Naples Florida. John K. and Betty moved to Florida in 2004, taking the position of Visitation Pastors at Covenant Presbyterian where they ministered weekly to hundreds of nursing home patients. John K. and Betty were also instrumental in building the Covenant Presbyterian children’s ministry program and were integral participants in Place of Hope Haitian Ministry (Les Cayes, Haiti). John K. will forever be remembered for his many musical talents, his love of people, and his deep desire to lead them to faith. He leaves behind a lifetime of service to Christ and the Church. He is survived by his son, Paul of Bonita Springs, Florida; daughter Cindy (Tom) Stuart of Fishers, Indiana; grandson Chris (Jennifer) Hastings of Mesa, Arizona; granddaughter Christeen (David) Hershey of Fishers, Indiana, sister-in-law Marion McCray of Atlanta, Georgia; sister-in-law Nancy (Don) Semon of Anderson, Indiana. He is also survived by three great-grandchildren along with many nieces, nephews, and friends too numerous to mention. John K. was preceded in death by his parents, his wife, Betty Summers, his son, Kent Summers, his sister, Mary J. Conway, and his brother, Max Summers. In lieu of flowers, memorial contributions may be made to Place of Hope Haitian Ministry, PMB 125, PO Box 413005, Naples, Florida 34101. (). A memorial service was held on Thursday, June 3, 2021 in Naples, Florida. Local visitation will be held on Thursday, June 10, 2021, from 11:00 am - 1:00 pm at Ovid Community Church, Anderson, IN.

The family of Rev. John Kenton (John K.) Summers created this Life Tributes page to make it easy to share your memories.

Send flowers to the Summers family.