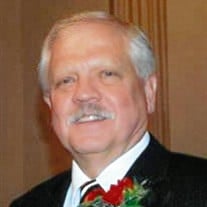 John Edward Vonderschmitt passed away after a long illness on Wednesday, March 31, 2021. The baby of the family, John was born on June 28, 1946. John was raised in a little white house on South Manhattan Drive in Muncie, IN. He liked to say that every day as a kid when he went outside, he could hear a basketball bouncing. John graduated a Rebel from Muncie Southside High School. He remained close throughout his whole life to many of his high school friends. He immediately started a family, naming his first daughter Angela Marie. Many of his friends were sent to Vietnam, but he was fortunate enough to begin a long career at Muncie General Motors. As a young man, he raised and rode horses. John loved riding his motorcycle, even riding it to Jacksonville, FL in the 1970s. He loved his burgundy Corvette. In the summers, he would have his beloved nieces and nephews from Florida come to Muncie to help him on his farm. John adored all of his nieces and nephews. He spent weekends with his daughter, taking her to movies. John never missed a softball game, even traveling to Tennessee and Georgia for her tournaments. He was always busy; in fact, he and two of his friends built each other’s houses. John loved raising his Weimaraners and hunting with them. Towards his forties, he added to his family, having a second daughter, Elizabeth Ann, followed by a son, Thomas Coral. John lived half of his life in Muncie and half in Pendleton. He began his college career when he was in his forties. John was not a candidate for college right out of high school but later went on to earn his Master's in English from Ball State University. With his GM retirement, he was able to start a second career teaching English through Ball State at the Pendleton Penitentiary. John traveled often with his two younger children, showing them the South and the West. It was important to him to show his kids the country. John looked forward to attending their school and sporting events. At this time, he added one more son to his family, Quinn Smith. His children arrived every 21 years. Life slowed down, but John remained busy tinkering outdoors. He now had time to enjoy his passion with his flowers and trees and yard. If he were young and going to college for the first time now, he would have chosen horticulture. From his house in Pendleton, John enjoyed the nightly sunsets above the field across the street. In his later years, he loved watching Westerns and Fox News. John was proud of his three older kids, their college degrees, and their career choices. He always pushed his kids to be better, whether academically, athletically, or morally. John wanted his children to stay in contact with all of the family. His youngest son is doing well in middle school. John never knew a stranger and enjoyed talking to everyone. He loved all of his children, even though it was hard for him to show it. John was loved and will be missed. Now that he is in heaven, he has rejoined his parents and his sister. There will be a memorial service in the early summer in Muncie. www.loosecares.com

John Edward Vonderschmitt passed away after a long illness on Wednesday, March 31, 2021. The baby of the family, John was born on June 28, 1946. John was raised in a little white house on South Manhattan Drive in Muncie, IN. He liked to say... View Obituary & Service Information

The family of John E. Vonderschmitt created this Life Tributes page to make it easy to share your memories.

John Edward Vonderschmitt passed away after a long illness on...

Send flowers to the Vonderschmitt family.