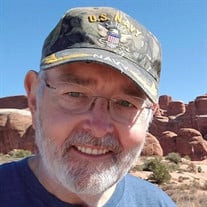 John Robert Yates, 66, of Anderson, passed away on January 15, 2021, at his home. He was born on July 7, 1954, in Anderson, Indiana. John retired from the Department of Defense in 2015 after over 33 years of civil service, including six years in the US Navy. He was acknowledged with several awards during his time and was presented the highest award a civilian can receive, the Achievement Medal for Civilian Service. In high school, he played with a group named Brass Beats. After he retired, he continued his love of music playing trumpet with the Alexandria Community Band, the Anderson Community Band, Alpha Brass, Mudsock Jazz Combo, and at his local church, First Baptist Church of Anderson. His hobbies included bird watching, traveling, cooking, playing games with family, listening and playing music, and photography. He won several first-place awards for the best photo. He also held an extra class license in Ham Radio. He was also an avid Indy Racecar fan. John is survived by loving spouse whom he married September 23, 1983, Susan Yates; stepson, Chad Clayburn; daughter, Kristy (James) Spence, siblings, James (Linda) Yates, and Kay (Bob) Cook; grandchildren, Dustin Linhart, Alyssa (Dakota) Reed, and Alexandria Spence, 6 nieces and nephews. John was preceded in death by his parents, Kenneth and Martha Yates, and sister, Carolyn Yates. Visitation will be held on Wednesday, January 20, 2021, from 12:30 - 2:30 pm at Loose Funeral Homes & Crematory, Anderson, IN. The service will be live-streamed on the Loose Funeral Homes & Crematory YouTube channel at 2:30 pm on Wednesday, January 20, 2021, with Dr. Art Jaggard officiating. Burial will take place in the Mt. Zion Lutheran Cemetery, Ovid. Memorial contributions may be made to the American Cancer Society or the Madison County Humane Society. www.loosecares.com.

John Robert Yates, 66, of Anderson, passed away on January 15, 2021, at his home. He was born on July 7, 1954, in Anderson, Indiana. John retired from the Department of Defense in 2015 after over 33 years of civil service, including six years... View Obituary & Service Information

The family of John Robert Yates created this Life Tributes page to make it easy to share your memories.

Send flowers to the Yates family.