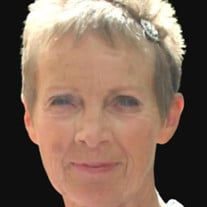 Juestine R. Birchmeier, 70, passed away peacefully surrounded by family and friends on April 12th, 2022 after a courageous battle with ALS. Juestine loved life. She enjoyed reading, listening to music, shopping, eating and hanging with her friends. Most of all she loved being a mom, grandma and wife. She graduated from Madison Heights High School. While raising her two girls, Juestine was a homemaker and operated her own cleaning business. She eventually hired on at General Motors in Marion, IN and subsequently retired from there. She was preceded in death by her parents, Ruby and Donald Conn, her brothers, Gary Johnson and Carson Conn, and her former mother-in-law, Jacquelyn Bailey. Juestine leaves behind her husband, Terry Birchmeier; her two daughters, Mackenzie (Jeff) Ash and Allison (Justin) Earls; her seven grandchildren, Kate (Cam) Cockerham, Jaren (Sara) Cravens, Maddie and Kaden Terrell, and Austin, Carson and Raegan Earls; her six siblings, Talmage, Darrell, Troy, Terry, Geraldine, and Sharleen; several nieces and nephews; her former husband, Tony (Jane) Bailey; and her former son-in-law, Greg (Earon Jamison) Cravens. Juestine had an abundance of friends, but a few of her very best were Saundra Turner, Becky Wright and Julia Hammock. Juestine will be missed every day by those that loved her and her influence will live on through her daughters and grandchildren. Funeral services will be on Tuesday, April 19 at 1:00 P.M. at Loose Funeral Homes & Crematory, 200 W. 53rd Street, Anderson. Visitation will be on Monday, April 18 from 5:00 P.M. - 8:00 P.M. at the funeral home, and on Tuesday from 12:00 P.M. until the time of services. Burial will be in Anderson Memorial Park Cemetery. Condolences may be shared with the Birchmeier family at www.LooseCares.com.

Juestine R. Birchmeier, 70, passed away peacefully surrounded by family and friends on April 12th, 2022 after a courageous battle with ALS. Juestine loved life. She enjoyed reading, listening to music, shopping, eating and hanging with her... View Obituary & Service Information

The family of Juestine R. Birchmeier created this Life Tributes page to make it easy to share your memories.

Send flowers to the Birchmeier family.