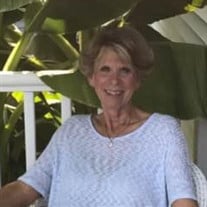 Kathy L. Christel (Powers), 69, of Pendleton, IN, passed away on Friday, December 3, 2021, after a short illness. She was born in Sacramento, CA, on July 21, 1952, to Glenn and Betty (Smear) Powers. In 1955 her family moved to Anderson, IN. Kathy spent most of her life in Pendleton, IN. She attended and graduated from Pendleton Heights High School in 1970 - the first graduating class. In 1989, she married Cecil (Bud) Dishman. They remained married for 24 years, until his death in 2013. Several years later, she met and fell in love with Kevin Christel. They were married shortly after meeting and enjoyed six years together until Kevin’s untimely passing in November, 2021. Throughout most of her life, she had a career as a Correctional Sergeant where she retired after serving 38 years at the Indiana Reformatory and Pendleton Correctional Juvenile Facility. Kathy loved reading, crocheting, gardening, wine, and people. She had an awesome, ornery sense of humor, and was an amazing person with a heart filled with kindness and compassion. She was an avid animal lover, always enjoying her cats and rescued ferrets. She leaves behind her son, Scott Keegan and daughter-in-law Amanda; 2 granddaughters, Quinn and Ashtyn Keegan; siblings: Alan Powers (Crawfordsville), Michele Powers (Pendleton), Joni Haley (Middletown); and father Glen Powers (Middletown). Kathy was preceded in death by her husbands, Cecil Dishman and Kevin Christel; and her mother, Betty Powers. A Celebration of life for both Kathy and Kevin will be held at Loose Funeral Homes & Crematory, 200 West 53rd Street, Anderson, IN, 46013, on Wednesday, December 22, 2021, from 6:00 p.m. until 8:00 p.m. www.loosecares.com.

The family of Kathy L. Christel created this Life Tributes page to make it easy to share your memories.

Send flowers to the Christel family.