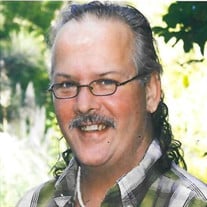 Kenneth Lockridge, 56, of Pendleton, "A Paramount Theater Restorer" passed away on April 19, 2022, under the final care of Community Hospice after a three-year medical struggle. Ken was born on December 7, 1965, in Anderson to Herbert Kenneth Lockridge and Barbara Ann Barton who preceded him in passing. A brother, Michael Lockridge, and long-time companion, Jonathan Leisure, also preceded him. Ken is survived by his sisters, Michelle Cooper and Peggy Lockridge; and brothers, Jerry and Gary Lockridge and Christopher Geist. Also, surviving is his long-time friend, business partner, and caregiver, James R. Abraham. Ken joined the Paramount Theater restoration team in 1989 and worked through the restoration of first the ballroom and finally the theater itself. He guided his brothers and friends as they worked throughout the building. He was skilled in decorative painting and the application of gold leaf as shown in the ballroom. He was also the concessions manager for a time. In the theater, he and his friend, Jeff Wood, installed all of the decorative vines, flowers, and trees. The next time you visit the Paramount look around in the theater and you will see his handiwork. Together, Ken and Jim, created and operated for three years, The Rosemount Inn Bed and Breakfast in Vevey, Indiana. After Jim moved to Savannah, GA in 1998 to Manage the Lucas Theater restoration, Ken and Jon Leisure joined Jim in that project which lasted two years. They lived on beautiful Tybee Island near Savannah in a home that Jim built. Later, Ken and Jon moved back to Madison County and shared a beautiful home located on Fall Creek near Pendleton. As an avid gardener, Ken used his skills to create beautiful flower gardens throughout the property which are just coming into bloom. He would be happy to see the flowers. He was an avid fisherman and animal lover. Ken's talents were highly respected by all who knew of his work. While his family and friends will dearly miss his infectious smile, his beautiful work will live on at the Paramount Theater Center and Ballroom. Ken was aware of expansion plans for the new dressing room project and the Garden Room expansion. Visitation will be held Friday, April 22, 2022, 4:00 pm - 7:00 pm at Loose Funeral Homes & Crematory, 200 West 53rd St. Anderson, IN. Services will follow visitation at 7:00 pm at the funeral home. Cremation will take place following services. Memorial contributions may be made to the Paramount Theater c/o Garden Room expansion or Dressing Rooms. www.loosecares.com.

Kenneth Lockridge, 56, of Pendleton, "A Paramount Theater Restorer" passed away on April 19, 2022, under the final care of Community Hospice after a three-year medical struggle. Ken was born on December 7, 1965, in Anderson to Herbert Kenneth... View Obituary & Service Information

The family of Kenneth Lockridge created this Life Tributes page to make it easy to share your memories.

Send flowers to the Lockridge family.