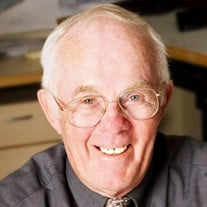 Kenneth Rubbert Montgomery - December 12, 1931, to June 5, 2022 Kenneth (Ken) Montgomery passed away on Sunday, June 5, 2022, at the age of 90. He died at home surrounded by all nine of his children. He lived a very healthy life until the last few years when his mind was still sharp but other ailments caught up with him. His last few days were spent at home talking with his children and grandchildren, telling stories, and laughing and crying together. To tell the story of Ken’s Life is to tell the story of Ken and Shirley. They were married for 65 years. Shirley passed away in 2019. Their devotion to each other was an inspiration to everyone who knew them. They were long-time members of St. Mary’s Catholic Church in Anderson. Ken is survived by his 9 children, 25 grandchildren, and 31 great-grandchildren; son, Mike Montgomery (Karla); daughter, Kathy Montgomery Gooding; daughter, Judy Ryan; son, David Montgomery (Nancy); son, Andy Montgomery (Debbie - deceased); son, John Montgomery (Kathryn); daughter, Mary Smith (John); son, Tom Montgomery (Andrea); and son, Bill Montgomery (Kim). Also, surviving is his sister Sheila Hiebert (Lyle). He also had a sister Winfred Anne who passed away. Also surviving are Sister-in-law and Brother-in-law Judy and Dave Grissmer. Ken was born in Clinton, Indiana in 1931 to Noel and Ruby (Rubbert) Montgomery. His family moved to the south side of Indianapolis from Clinton when Ken was young. He spent summers on the family farm in Parke County Indiana. He attended Southport High School where he played football, basketball, and ran track. He attended one year at Butler University but then enlisted in the Army from 1952 until 1954 during the Korean War. He was last stationed at Fort Benning, Georgia. During a leave in June of 1954, he met Shirley on a blind date, and after an honorable discharge from the Army, Ken and Shirley were married in December 1954. They lived and attended Auburn University in Alabama where he graduated second in his class from Architectural School. After graduation, Ken worked for Sherlock, Smith, and Adams, a large Architectural Firm in Montgomery Alabama. From there, Ken and his growing family moved back to Indianapolis where he worked for Everett I. Brown Architects. Through a family connection in 1959, he was hired by Anderson Architect Arthur B. Henning, and the family moved to Anderson. During his time with Art Henning, he designed many Anderson Buildings including Anderson City Hall, The Krannert Fine Arts Building at Anderson University, and The Anderson No. 1 Fire Station. In 1978 Ken and Shirley founded K. R. Montgomery & Associates. The firm is now named krM Architecture. The firm he started and led has now grown to 28 people completing designs throughout Indiana and the Midwest. He was the Indiana AIA president in 1986. In 2016, krM Architecture was named the Indiana “Firm of the Year” by his peer architects and Ken accepted the Award for the firm. In 2017, Ken and Shirley were named “Entrepreneurs of the year” by the Madison County Chamber of Commerce. Some of the firm’s projects include the Anderson Public Library, Anderson University Wellness Center, Anderson University Library, Eastside Elementary School, and Community Hospital Surgery Expansion. Outside of Anderson, the firm has designed about 40 public libraries, several schools, health facilities, and historic restoration projects. While slowing down his work starting at age 77, Ken continued to work helping clients and on projects until April 2022. Ken always talked warmly about his work with his friends at Anderson University and the projects they allowed him to design. His favorite project was Reardon Auditorium at Anderson University completed in 1984. Ken was very hard-working and energetic, but he also enjoyed his life. Chief among his interests were snow skiing, golf, and travel. A family tradition was taking the entire family on ski trips primarily to places in Michigan and Colorado. All nine children, spouses, and grandchildren learned to snow ski through these trips. Ken continued to ski until age 82. In the last few years, he enjoyed visiting family at Lake Lemon and deep-sea fishing in Florida with family trips arranged by his son John. To his family, it seems that God blessed Ken Montgomery as one of the richest men on earth. We will miss him always. Visitation will be held on Friday, June 10, 2022, from 10:00 a.m. until 1:00 p.m. at St Mary’s Catholic Church, 1115 Pearl Street, Anderson, IN, 46016. A Mass of Christian Burial will be Friday, at 1:00 p.m., at the church with Fr. Marty Sandhage officiating. Burial will be at East Maplewood Cemetery where military honors will be conducted. Memorial contributions may be made to Anderson University. www.loosecares.com.

Kenneth Rubbert Montgomery - December 12, 1931, to June 5, 2022 Kenneth (Ken) Montgomery passed away on Sunday, June 5, 2022, at the age of 90. He died at home surrounded by all nine of his children. He lived a very healthy life until the... View Obituary & Service Information

The family of Kenneth Rubbert Montgomery created this Life Tributes page to make it easy to share your memories.

Send flowers to the Montgomery family.