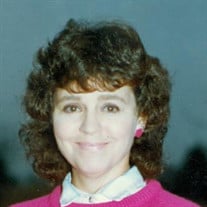 Linda Jones Everett, age 79, passed away on May 29, 2021, at her daughter’s home in New Buffalo, Michigan. She was born on February 13, 1942, in Anderson, Indiana, and she grew up and spent most of her adult life in Markleville, Indiana. Linda was a 1960 graduate of Markleville High School and continued her education at Indiana University. She retired from Delco Remy, Plant 20, after 30+ years of employment. While employed at Plant 20, she was co-editor of the Surefire News, the Plant 20 newspaper. She was co-chairperson for the Plant’s United Way Drive. She also was the Suggestion Department coordinator. Linda was a long-time member of the Shirley Chapter #492 of the Eastern Star. In earlier years, while working and raising her children, Linda was a 10-year volunteer leader and founder of the Country Sunshine 4-H Club. She was proud that each of her children were 10 year 4-H members. She served a term on the Madison County 4-H Board. Along with her children, Linda was a member of the Pendleton Swim Club. Linda enjoyed many activities and hobbies, including crocheting, sewing, downhill skiing, whitewater rafting, raising flowers and gardening. She was a square dancer and clogger. Linda loved to travel, visiting 48 U.S. states and 16 countries in Europe and North America. After her retirement, she enjoyed quilting and made many quilts for her children and grandchildren. She adored her family. Linda is survived by her three children, daughter Sarah Denise Everett (wife Melanie Ann Roberts), son J. Anthony “Tony” Everett, and daughter Angela Lee (husband Stephen Brett) Thompson. She is also survived by 10 grandchildren, Mackenzie Leigh Everett, Megan Lynn Everett, Schuyler Brett Thompson, Sterling Beck Thompson, Sonny Elias Thompson, Shiloh Eden Thompson, David Ryan Upshaw, Stephen Anthony Upshaw, Joshua Michael Upshaw and Timothy Aaron Lambert. The latter four grandsons are children of Cynthia Jolyn Lambert, who as life sometimes sadly happens, was estranged from Linda. Linda was also blessed with 8 great-grandchildren. She was preceded in death by her father, Kenneth Beck Jones in 1954, her mother, Mollie Grider Jones in 2003, and an infant grandson, Silas Gabriel Thompson in 2002. Linda loved many farm animals and pets throughout her life, but her canine soulmate, precious little companion, and loyal best friend, Lacy, preceded her in death in 2006. Visitation will be held at Loose Funeral Home, 200 West 53rd St., Anderson, IN, 46013, on Friday, June 4, 2021, from 11:00 a.m. until 1:00 p.m. Funeral services will be held at the funeral home on Friday, June 4, 2021, at 1:00 p.m. Linda specifically requested a funeral service in the afternoon and noted that she disliked mornings. Interment will be held immediately following the service at Linda's final resting place, Mechanicsburg Cemetery. www.loosecares.com.

Linda Jones Everett, age 79, passed away on May 29, 2021, at her daughter&#8217;s home in New Buffalo, Michigan. She was born on February 13, 1942, in Anderson, Indiana, and she grew up and spent most of her adult life in Markleville, Indiana.... View Obituary & Service Information

The family of Linda Jones Everett created this Life Tributes page to make it easy to share your memories.

Send flowers to the Everett family.