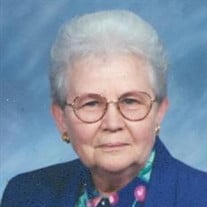 Mary Louise (Gustin) Markle, 93, of Markleville, passed away in the early morning Friday, February 12, 2021, at Rawlins House in Pendleton. She was born April 2, 1927, in rural Anderson to Earl and May (Lovett) Gustin. As a child, she experienced life on the farm. Her mother's example of preparing bounteous meals for the farm hands played a part in teaching Mary how to host guests later in her own home. Mary graduated from Markleville High School in 1945. She worked over 35 years for the U.S. Postal Service in Markleville. For many years, she enjoyed preparing the weekly worship folder for North Christian Church, as well as other various contributions behind the scenes. She was a lifelong and honored member of AMVETS Auxiliary. Her Buttermilk Cakes were a specialty for many gatherings in the home and community. A few years following graduating high school as classmates, Mary and Max were married in June 1950. They enjoyed 68 years of marriage. Their marriage was blessed with two children, David and Debra. Special times included fun family vacations in Gatlinburg, TN. Mary is survived by her son, David E. (Peggy) Markle of Anderson, IN; grandchildren, Brett (Bethany) Griffith of Greenwood, IN, Laura (Keelan) Markle Downton of Alexandria, VA, Ryan (Amy) Griffith of Fishers, IN; great-grandchildren, Breanna and Blake Griffith, Genevieve Downton, Knox Griffith; son-in-law, Bruce (Joyce) Griffith; sisters-in-law, Grace Markle, Nancy (Kyle) Sandefur; numerous nieces and nephews. In addition to her parents, Mary was preceded in death by her husband, Max; daughter, Debra L. Griffith; brother, Robert L. Gustin; brothers-in-law, Eldon Markle, Harold Markle, Gerald Lewis, Gene Camplin; and sisters-in-law, Martha Lewis, Joyce Markle, and Ruth Mae Gustin. In light of the coronavirus pandemic and being mindful of the well-being of Mary's many friends, the funeral will be private, with burial in Mechanicsburg Cemetery. The service can be viewed after 1:00 pm Monday on the Loose Funeral Homes and Crematory YouTube channel. Memorial contributions may be made to Markleville North Christian Church, P. O. Box 162, Markleville, IN 46056. www.loosecares.com.

Mary Louise (Gustin) Markle, 93, of Markleville, passed away in the early morning Friday, February 12, 2021, at Rawlins House in Pendleton. She was born April 2, 1927, in rural Anderson to Earl and May (Lovett) Gustin. As a child, she experienced... View Obituary & Service Information

The family of Mary Louise Markle created this Life Tributes page to make it easy to share your memories.

Send flowers to the Markle family.