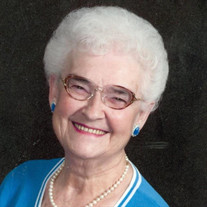 MaryBelle Harless, 97, of Pendleton, passed away peacefully on April 8, 2022, at Rawlins House, Pendleton She was born on March 16, 1925, to Virgil and Elizabeth (Trick) Whitesel. She and her husband, Clarence Harless, were married for 66 years until his passing in 2008. She worked at The Gospel Trumpet while Clarence, her husband, was in World War II. On his return, they purchased a farm in Pendleton. MaryBelle became a homemaker and cared for her four daughters. She also was an excellent seamstress and sewed for many. She enjoyed gardening, bowling, various games, crossword puzzles, walking, and cooking. MaryBelle attended South Meridian Church of God for 80+ years, where she used her talent of music playing her Hawaiian guitar, Sunday School teacher, and a member of the Women's Missionary Society. She will be missed by her children, Luana Harless, Denise (Steve) Downey, Christine (Sheldon) Swank; grandchildren, Chuck (Erin) Hopper, Cindy Wallace, Edward (Monica) Hopper, Lori (Travis) Carpenter, Traci Downey, Seth Swank, Mark (Becca) Swank, David Swank, 18 great-grandchildren, four great-great-grandchildren, and son-in-law, Harrold Hopper. She was preceded in death by her parents, husband, Clarence E. Harless, her daughter, Carolyn Hopper, her grandson, Philip Swank, and her two sisters and brother. Visitation will be held Saturday, April 23, 2022, 10:00 am - 11:00 am at South Meridian Church of God, Anderson, IN. Services will be Saturday, April 23, 2022, at 11:00 am at the church with Pastor Tim Wimmer officiating. Burial will take place in Anderson Memorial Park at 3:00 pm.. Memorial contributions may be made to South Meridian Church of God/Youth. www.loosecares.com.

MaryBelle Harless, 97, of Pendleton, passed away peacefully on April 8, 2022, at Rawlins House, Pendleton She was born on March 16, 1925, to Virgil and Elizabeth (Trick) Whitesel. She and her husband, Clarence Harless, were married for... View Obituary & Service Information

The family of MaryBelle Harless created this Life Tributes page to make it easy to share your memories.

MaryBelle Harless, 97, of Pendleton, passed away peacefully on...

Send flowers to the Harless family.