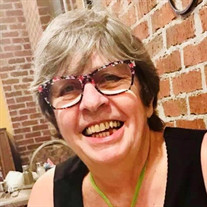 Patsy Pauline Holcomb (Leap), passed away peacefully at home after an extended illness on Monday, August 30, surrounded by her loving family, at the age of 76. She had been a resident of Anderson for over 30 years. Patsy was born at home outside Leiters Ford on April 18, 1945, to Manson and Gladys Leap (Shidaker), and was the oldest of their three children. Patsy was active in school, as drum major, cheerleader, and prom queen before graduating as salutatorian from Aubbeenaubee Twp Schools in ’63. She moved on to achieve her Bachelors in Elementary Education at Indiana University Bloomington. She was a member of Alpha Xi Delta Sorority, where she worked the dining halls to help put herself through school. One of her favorite memories of her time there was participating in the Little 500. She spent many years as a teacher, one of her great passions, then moved into insurance, and finally worked for the state in the Department of Family and Children until her retirement. Through it all, she remained a teacher of life. Though she grew up knowing her future husband, they did not truly find one another until he returned from the war in Vietnam. They were married on June 22, 1968, and spent their years moving around the country, raising their two children until they finally settled back home in Indiana in 1988. Among their many travels, they spent much time researching genealogy and visiting lighthouses, two of her passions. Another was music, and they spent many years in retirement bringing light and joy to others through song until dementia fully took hold. Patsy is preceded in death by her parents, Manson and Gladys Leap (Shidaker) and her granddaughter, Savannah Grace Thompson. She is survived by her soulmate, Jerry Lee Holcomb, their two daughters, Shannon Rae Hartzell and Dulcie Lynn Holcomb, both of Anderson, her brother and sister-in-law, John and Debi Leap of Rochester, and her sister Ann Blair, also of Rochester, their beloved children, and families, as well as a host of other family and friends. Services for Patsy will be held at Loose Funeral Home in Anderson on Saturday, September 4th. Visitation will be from 1-3 pm and services will begin at 3 pm. In lieu of flowers, please consider donating to the Fulton County Historical Society, an organization near and dear to her heart. Checks can be made out to Fulton County Historical Society and mailed to 37 E 375 N, Rochester, IN 46975, or envelopes will be available at the time of service.

Patsy Pauline Holcomb (Leap), passed away peacefully at home after an extended illness on Monday, August 30, surrounded by her loving family, at the age of 76. She had been a resident of Anderson for over 30 years. Patsy was born at home outside... View Obituary & Service Information

The family of Patsy Holcomb created this Life Tributes page to make it easy to share your memories.

Send flowers to the Holcomb family.