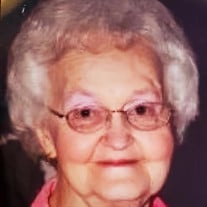 Phyllis A. Stevens, 87, of Anderson, passed away on April 6, 2022. She was born on March 1, 1935, in Anderson to Louis and Ruth (Cronk) Bauman. Phyllis was a 1954 graduate of Anderson High School. She was also a member of the Anderson High... View Obituary & Service Information

The family of Phyllis A. Stevens created this Life Tributes page to make it easy to share your memories.

Send flowers to the Stevens family.