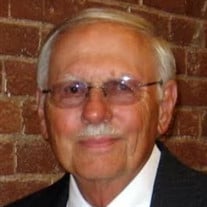 Ralph Lee Hite, 84, went home to be with his Lord and Savior on April 9, 2021. Ralph, a lifelong resident of Anderson, was born on May 18, 1936, to Jesse and Mildred Hite. He graduated from Anderson High School in 1956 and attended Ball State University. Ralph married his high school sweetheart and love of his life, Kay Harris Hite, on Nov. 9, 1958, whom he remained married to for 62 years. He had three children, five grandchildren, and three great-grandchildren to whom he was a loving father, grandfather, and great-grandfather. Always a hard worker and great provider for his family, Ralph was an artist at the Jon Wilding Art Studio for 15 years, a safety engineer for Delco Remy for 29 years, where he retired, the safety director at Nu-Tec Roofing for 22 years, owner of RH Screen Printing and Lettering, and a board member for the Anderson YMCA. A faithful servant and follower of Christ, Ralph was a member of the Park Place Church of God and a former member of East Side Church of God. Ralph was an avid racquetball player where he won numerous awards, tournaments, and competed at a high amateur level. He also loved playing tennis with his wife and going to many tennis tournaments together from the U.S. Open in NYC to the Australian Open in Melbourne. A great leisure activity for Ralph was also riding his bike. Ralph was preceded in death by a daughter, Lori Hite Callender; his parents, Jesse and Mildred Hunter Hite; his father-in-law and mother-in-law, W. Hardin and Anne M. Harris; sister-in-law, Elaine Harris Boys; brother-in-law, Hal Harris; and several aunts, uncles, and cousins. His survivors include his loving wife, Kay; son, Troy Hite (Ellen); daughter, Holly McMullen (Todd); grandchildren, Kiely Garrett (Alan), Chad Callender, USN (Becky), Tyler Hart, Evan McMullen, and Graham McMullen; and great-grandchildren, Vera Garrett, Elias Garrett, and Gavin McMullen; brother-in-law, Phil Harris (Lois); and sister-in-law, Nancy Swenk Harris. Ralph was always a people person and lover of conversation; he never met a stranger. He loved his family as they loved him and he was always there for their every need and "safety". Ralph will forever be loved and missed by his family and friends. A memorial service will be on Saturday, April 17, at 5 p.m. at Loose Funeral Homes & Crematory, 200 W. 53rd St., Anderson, with visitation from 1 to 5 p.m. Memorial gifts may be made to the charity of the donor's choice. www.loosecares.com

Ralph Lee Hite, 84, went home to be with his Lord and Savior on April 9, 2021. Ralph, a lifelong resident of Anderson, was born on May 18, 1936, to Jesse and Mildred Hite. He graduated from Anderson High School in 1956 and attended Ball State... View Obituary & Service Information

The family of Ralph L. Hite created this Life Tributes page to make it easy to share your memories.

Send flowers to the Hite family.