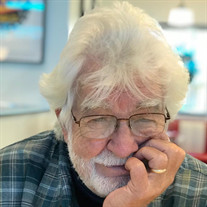 It is with great sadness the family of Rev. Joe Lee Huff announces his passing on Friday, Jan. 21, 2022, at the age of 80. Born to Ethel Dewitt Tate and Gordie Huff on Sept. 22, 1941, in Fordsville, Kentucky, Joe was a resident of Anderson, where he lived with his wife of 40 years, Peggy Gibson Huff. In 1960, following high school, Joe enlisted in the United States Navy, where he served as a signalman during the Cuban Missile Crisis before being honorably discharged in 1963. Following his military service, Joe began work at General Motors, where he worked for over three decades. During his time with the company, he also completed his degree at Anderson University, graduating in 1986 with a degree in marriage and family relations. Upon completion of his degree, Joe began to serve as pastor of Cornerstone Ministries, where he served for over 30 years. Known for his warm and kind demeanor, his compassion for others and his spirit of service, he continued his education by pursuing his master's degree in pastoral care and counseling from Anderson University School of Theology in 1993. Following his retirement from General Motors in 1995, Joe went on to serve in multiple capacities for the Anderson Police Department both as chaplain and on the Civil Service Merit Commission. It was through this work with the police department that he was called to serve those in the correctional system. From 2005 to 2013, Joe served as program coordinator for the Indiana Department of Correction before joining Man for Man Ministries, where he was still active upon his death as minister of re-entry. With his affable and familiar disposition, Joe helped countless formerly incarcerated inmates transition to freedom by offering real-world spiritual guidance and his friendly ear. A lover of the outdoors and the arts, Joe enjoyed fishing, shooting clay at the gun club, and was an avid reader. He was a loyal Chicago Cubs fan and coffee connoisseur. In addition to being a fan of Americana, blues, and folk music, he was also a skilled, self-taught musician himself. A man of deep faith, Joe will be lovingly missed and forever remembered by his wife, Peggy; his children, Joseph Huff, Renee Elgin (Virgil Cook), Keith Elgin (Cristi), and April Huff-Martin (Josh); his grandchildren, Clayton Elgin, Michaela, Marissa, and Meleah Levell, Jett Fox, Lilly Cook, Austin Ripperdan, Landon Hogge and Magnolia Martin; his great-grandchildren, Amelia Levell and Aiden Eacret; and his sisters, Juanita Payne and Patricia Huff. Joe was preceded in death by both his parents as well as brothers, Earl and Donnie. His mentorship left an indelible mark and he will be greatly missed by everyone at The Gathering and Man for Man. Until we see you again Joe, may you rest in the loving arms of Jesus. The family would like to extend special thanks to the ICU nurses at Ascension St. Vincent as well as Doctors Molina and Mares. A memorial service honoring the life of Rev. Joe Huff will be held on Saturday, Feb. 5 at 1 p.m. at Loose Funeral Homes & Crematory, 200 W. 53rd St., Anderson. A second service will be held at the Kentucky Veterans Cemetery West in the spring. In lieu of flowers, contributions can be made to Man for Man Ministries, 415 Main St., Anderson, IN 46016. Condolences may be shared with the Huff family online at www.loosecares.com. His Lord said unto him, Well done, thou good and faithful servant: thou hast been faithful over a few things, I will make thee ruler over many things: enter thou into the joy of thy Lord. Matthew 25:21

It is with great sadness the family of Rev. Joe Lee Huff announces his passing on Friday, Jan. 21, 2022, at the age of 80. Born to Ethel Dewitt Tate and Gordie Huff on Sept. 22, 1941, in Fordsville, Kentucky, Joe was a resident of Anderson,... View Obituary & Service Information

The family of Rev. Joe Lee Huff created this Life Tributes page to make it easy to share your memories.

It is with great sadness the family of Rev. Joe Lee Huff announces...

Send flowers to the Huff family.