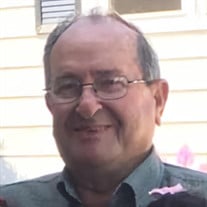 Richard Thomas Bilbrey, age 82, of Anderson, went to be with his Heavenly Father on November 19, 2021, at Community Hospital in Anderson, IN. He was born September 3, 1939, in Rickman, Overton Co., TN, to the late William Dewey and Zelphia Inez (Sink) Bilbrey. Richard attended Valley Grove Free Will Baptist Church, and prior to that was a longtime member of the East 38th Street Free Will Baptist Church. Delco Remy was where he worked for 30 plus years and retired in 1999. He was a hard-working man all of his life and was a loving father and devoted husband. He enjoyed planting his garden, ginseng digging, mushroom hunting, riding his gator, and going to bluegrass festivals. Richard enjoyed cutting up with his family and friends and knew no stranger. You would never see him without a smile, and he always had a joke prepared or an old story to tell. He will be dearly missed and cherished by all of his loved ones. Richard is survived by his loving wife, Claudean Bilbrey; daughters: Grace Stephens and her husband Mike, and Brenda Looper and her husband, Tom; grandchildren: Darrin, Megan and her husband Roger, Cody and his wife, Heylee, and Emily and her husband, Jesus; and great-grandchildren: Madison, Jade, Ava, Minnie, Emory, and Brooklyn. Also, surviving is his sister; Betty Jo Bowman and her husband, Bobby; brothers; Arthur Douglas Bilbrey and his wife, Norma, Hershel Bryson Bilbrey, William George Bilbrey and his wife, Lynne, and Calvin Phillip Bilbrey and his wife, Sara; brother-in-law; Jerry Wise; and sister-in-law; June Bilbrey. In addition to his parents, he was preceded in death by his sisters: Dorthy Mae Bilbrey, Mary Wanda Bilbrey, and Justine Wise; brothers: James Edward Bilbrey and Johnny Madison Bilbrey; and sister-in-law: Barbara Bilbrey. Funeral services will be held for Richard on Wednesday, November 24, 2021, Loose Funeral Homes & Crematory, at 1:00 pm with burial to follow in the Anderson Memorial Park. The family will welcome friends at the funeral home starting at 11:00 am until 1:00 pm. Officiating the service will be Bro. Joe Roysden. www.loosecares.com.

Richard Thomas Bilbrey, age 82, of Anderson, went to be with his Heavenly Father on November 19, 2021, at Community Hospital in Anderson, IN. He was born September 3, 1939, in Rickman, Overton Co., TN, to the late William Dewey and Zelphia... View Obituary & Service Information

The family of Richard Thomas Bilbrey created this Life Tributes page to make it easy to share your memories.

Richard Thomas Bilbrey, age 82, of Anderson, went to be with...

Send flowers to the Bilbrey family.