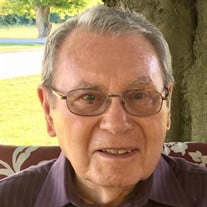 Richard "Dick" Ginder, 88, of Anderson, passed away peacefully on April 14, 2021, at Sugar Fork Crossing surrounded by his loving family. He was born on November 20, 1932, in Ingalls, Indiana. Dick graduated from Pendleton High School in 1950, married the love of his life, Loretta in 1952, and proudly joined the United States Army in 1953. During his enlistment, he was stationed in England where he was a clerk. After being honorably discharged in 1955, he worked at Delco Remy as a pipe fitter and retired after 48 years of service. He also owned and operated Ginder Plumbing for over 40 years. He was a former Mason at the Solar Lodge and the Anderson Eagles Lodge. He was an avid Cincinnati Reds and NASCAR fan, enjoyed spoiling his children, grandchildren and great-grandchildren, discovering local eateries with his family, hunting, and fishing. He overcame life's ups and downs with no complaints. Dick is survived by his two sons, Ronald (Barbara) Ginder and Michael (Darlene) Ginder; grandchildren, Shannan Ginder (Matt) Haidle, Ashley (fiance' Jacob Conflitti) Ginder; great-grandchildren, Alison Haidle, Braeden Haidle; siblings, Donald (Ann, deceased) Ginder, Marilyn (Bruce, deceased) Cox, Madelyn (Ron) Hoke; brother-in-law, Larry (Coni) Reveal; and several nieces and nephews. He was preceded in death by his loving wife of 69 years, Loretta June (Reveal) Ginder; parents, Roy and Ethel (Bush) Ginder; brother-in-laws, Norman and Carolyn (Reveal) Moore, Robert and Lucille (Kimm) Reveal, and Phil and Dorothy (Reveal) Robertson. Visitation will be held Thursday, April 22, 2021, 5:00 pm - 8:00 pm at Loose Funeral Homes & Crematory. Services will be Friday, April 23, 2021, 11:30 am at the Funeral Home with Rev. Don Billey officiating. Burial will take place in the Gravel Lawn Cemetery in Fortville. Richard's family would like to thank the staff at Sugar Fork Assisted Living for their exceptional care and compassion shown to the entire Ginder family over the last two years. The family would also like to thank Brighton Hospice for the exceptional compassion and care in Dick's final days. Memorial contributions may be made to the Madison County Humane Society or the Animal Protection League. www.loosecares.com.

Richard "Dick" Ginder, 88, of Anderson, passed away peacefully on April 14, 2021, at Sugar Fork Crossing surrounded by his loving family. He was born on November 20, 1932, in Ingalls, Indiana. Dick graduated from Pendleton High School in 1950,... View Obituary & Service Information

The family of Richard "Dick" Ginder created this Life Tributes page to make it easy to share your memories.

Send flowers to the Ginder family.