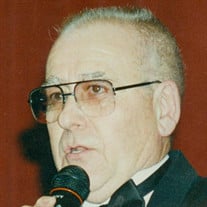 Richard “Rick” Dexter Seaver passed away on September 9, 2021. He was born on October 20, 1934, in Newport, New Hampshire to Helen (Brooks) Seaver and George Seaver. He was raised at the Knightstown Soldiers’ and Sailors’ Home in Knightstown, Indiana. While at the Knightstown Home his mentors discovered Rick had musical talent. They arranged and provided transportation for him to take vocal lessons at the Jordan School of Music in Indianapolis. This was made possible through a sponsoring American Legion Chapter. Rick graduated from Morton Memorial High School then attended Ball State University where he received his BS and MA degrees. He was a member of the BSU Concert Choir and Lambda Chi Alpha fraternity. Rick began his teaching career as the band and choral director at Middletown High School. After serving in the U.S. Army, he returned to teach at Scecina High School. Rick started as Choral Director of Anderson High School the next school year. While at Anderson High School he founded the show choir which through the years won many awards and accolades. He loved competing with the show choir and presenting musicals with the entire choral department. Rick was a staunch Anderson Indians supporter, truly loved teaching, and his students. After leaving the high school, he taught elementary for several years combining for 50 years of total teaching before finally retiring. Additionally, Rick was the choral director for several churches throughout his career. These included First Baptist Church and First Presbyterian Church in Anderson as well as the First Christian Church in Noblesville, Indiana. Giving back to the place which gave him so much, Rick started a show choir at the Knightstown Soldiers’ and Sailors’ Home which he led on weekends for numerous years. In April 1999 Governor Frank O’Bannon bestowed the honor of Sagamore of the Wabash Award to Rick, the highest civilian honor in the State of Indiana. Rick is survived by his wife of 61 years Dixie Lee Seaver; son Ric Seaver, daughter-in-law Stephanie Seaver; grandsons Griffin and Graham Seaver; brother, Loring (Delores) Seaver, several nieces and nephews. He was preceded in death by his parents and brother, Arthur. Visitation will be at Loose Funeral Home, 200 W. 53rd Street, Anderson, Indiana on Thursday, September 16 from 4:00 pm to 7:00 pm. The funeral service will be at Carmel United Methodist Church, 621 S. Rangeline Road, Carmel, Indiana on Friday, September 17 at 1:00 pm. In lieu of flowers, memorial contributions may be made to Dove Harbor Transitional Housing Ministry (Anderson), Hamilton County Humane Society (Noblesville), or a charity of your choice in memory of Rick. www.loosecares.com The service will be live-streamed through the Carmel United Methodist Church's website: www.CarmelUMC.org.

The family of Richard Dexter Seaver created this Life Tributes page to make it easy to share your memories.

Send flowers to the Seaver family.