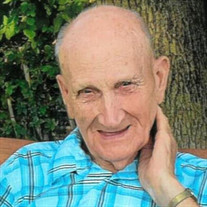 Robert "Bubby" Welker, 91, of Anderson, passed away on March 16, 2022, at his home. He was born on July 13, 1930, in Anderson, the son of Robert and Leona (Smith) Welker. Bubby was a construction worker with Laborers Union 1112. He married the love of his life, Mary Joann (Dollar) Welker, on October 31, 1947, and she preceded him in death. Bubby was also preceded in death by his sons, Eric and Daniel Welker, his parents, and his sister, Carolyn Demos. Bubby is survived by his children, Richard Welker (Jennifer), Lawrenceburg, TN, Linda Lambert (Roger), Anderson, and Sandy Oakley (Howard), Anderson; several grandchildren, great-grandchildren, and great-great-grandchildren; his brother, David Welker (Tereesa), Anderson; and several nieces and nephews. Funeral services will be on Monday, March 21, at 11:30 A.M. at Loose Funeral Homes & Crematory, 200 W. 53rd Street, Anderson, with Pastor Douglas Stein officiating. Visitation will be on Sunday, March 20, from 2:00-4:00 P.M. and on Monday from 10:30 A.M. until the service time. Burial will be in Memorial Park Cemetery. The family requests all attendees wear casual attire. Condolences may be shared with the Welker Family online at www.loosecares.com.

The family of Robert "Bubby" Welker created this Life Tributes page to make it easy to share your memories.

Robert &quot;Bubby&quot; Welker, 91, of Anderson, passed away on March...

Send flowers to the Welker family.