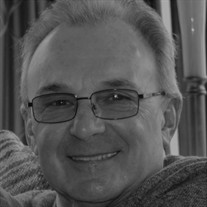 Ronald Lee Carey crossed the ultimate finish line on January 30th, 2021. Born on March 5, 1949, to Mildred (Otto) and Don Carey, Ron spent most of his life in Anderson on Goat Mountain. He graduated from Anderson High School in 1967, obtained his 4-year Journeyman’s card, and spent 30 years at Guide Lamp, General Motors Division, as a toolmaker. He was a member of the Midwest Oldtimers Vintage Race Car Club and a lifetime member of the American Motorcyclist Association. Ron is survived by his soulmate, Wilma (Ford), whom he married on November 17, 1989. They spent every minute together, accomplishing life's most complex and mundane tasks, and became known as a set, a real-life example of where two become one. Ron is also survived by four children, Tina (fiancé Scot Olah) Durbin of Pensacola FL, Chad (Carrie) Carey of Middletown, Stephanie (Casey) Maher of Muncie, and Kelly (Travis) Silvers of Lynnwood, WA; eight grandchildren, Riley Durbin of Pensacola FL, Zane and Carson Carey of Middletown, Connor Maher of Grove City, OH, Payton Maher of Muncie and Quinn Kuroiwa, Felicity and Ian Silvers all of Lynnwood WA; and great-granddaughter, Adelyn Durbin of Pensacola FL. Also, surviving is his brother, Rick (Marlene) Carey; niece, Cayla (Adam) Truman; many cousins and special friends, including long-time friend, Steve Knapp, and ex-wife, Marsha Noller. It’s impossible to describe Ron Carey without selling him short. He was a big family man. Ron’s greatest love was his wife, his kids, his grandkids, and his entire family. His second love was racing. He was a motocross champion and a descendant of a long line of racers. Ron attended the Anderson Little 500 for 64 consecutive years, and this past fall, after becoming the owner of a 1949 Kurtis Kraft Midget, was very excited to finally maneuver the laps in his very own car in front of many cheering family and friends! Was there anything that Ron couldn’t do? We say “No”. He was a family man, a carpenter, a toolmaker, a mechanic, a Jack-of-all-trades and master of all, but I believe his most important attribute was his generosity. He was there extending his skills and talents for whoever put out a call for help. Ron was also a perfectionist with endless energy and creativity; he measured not once or twice, but four times and then cut with the utmost care and precision. He took great pride in everything he did. You can find his handy work in the homes of nearly every member of the family, his friends, and even a few businesses, including the Madison County Historical Society. Ron took being a grandpa seriously too. He not only shared his love of racing with his grandkids, but he also had them on motorcycles almost before they could walk. He taught them the important things in life, like spending time at the track, getting good snacks, eating McDonald's cheeseburgers, popcorn, Lay's potato chips, popsicles, and having a cold pop! He also supported them all in every event over the years. He taught us all that it was time that mattered most, not gifts. On top of all these things he was also a detailed storyteller with a great sense of humor and a contagious laugh, while we know that our lives and Goat Mountain will never again be the same, a part of him will forever live on in us and this place. Visitation will be held Tuesday, February 2, 2021, 4:00 pm - 8:00 pm, at Loose Funeral Homes and Crematory, 200 W. 53rd St. Anderson, IN 46013. Services will be held Wednesday, February 3, 2021, at 1:00 pm at the funeral home. A Live-Stream of the service will be able on the Loose Funeral Home YouTube channel. Memorial contributions may be made to the Madison County Historical Society in memory of Ronald, 15 W. 11th St. Anderson, IN 46016. www.loosecares.com.

Ronald Lee Carey crossed the ultimate finish line on January 30th, 2021. Born on March 5, 1949, to Mildred (Otto) and Don Carey, Ron spent most of his life in Anderson on Goat Mountain. He graduated from Anderson High School in 1967, obtained... View Obituary & Service Information

The family of Ronald Lee Carey created this Life Tributes page to make it easy to share your memories.

Send flowers to the Carey family.