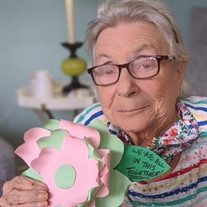 Ruth Ann (Klus) DeHart, 95, formerly of Anderson, passed away in Fort Myers, Florida on January 2, 2021. Ruth was born in Anderson on September 18, 1925, to a very interesting family. Her father, Charles Allman was a well-known Anderson fireman who, with her mother, Zella (Lewis) Allman, raised three children: Ruth, Dorothy, and Joseph. It is believed that the family tree included a line to Davy Crockett or Daniel Boone, famous frontier explorers. It is a fact that Ruth was related to Meriwether Lewis of the Lewis and Clark Expedition through her mother, Zella. Through her father, Ruth was also related to the Wright Brothers who flew the first successful airplane. Ruth graduated from Anderson High School in 1943. While there, she met her first husband, Willis Klus. Always brave and adventurous, after graduation, Ruth took a train trip out to Seattle (with a chaperone) to visit Willis while he was in training for the Army. She and Willis were married after WWII in 1946. They eventually settled in Anderson, where together they raised four children: Steve, Barbara, Tim, and Tom. After her children had left home, Ruth went to work at the Anderson Bulletin and eventually became the Family Page Editor. She worked there until 1979. During that time, Willis died unexpectedly in 1976. After becoming a widow, Ruth met LeRoy DeHart, a Navy veteran and widower, who also happened to work for the Anderson Herald. They were married in 1980 and settled in Lake Fairways, North Fort Myers, Florida. Roy loved to play golf, so Ruth learned how and picked it up pretty well. At one of their tournaments, she amazingly even made a "Hole in One". Ruth and Roy enjoyed nearly ten years together, but Roy died in 1990 of complications during surgery. Following Roy's death, Ruth stayed active and volunteered at the Barbara Man Theater in Fort Myers. She attended the Presbyterian Church there. For over a year, Ruth lived with her sister, Dorothy in Tuscon, Arizona, but returned to Florida to be near her daughter. Ruth loved to travel and one of her favorite trips was to visit the Crystal Cathedral and Queen Mary Museum in California. At the age of 80, she traveled with a tour group to England and Ireland, and while in Ireland, she made the steep climb to kiss the famous Blarney Stone. In addition to her parents and husbands, Ruth was preceded in death by her sister, Dorothy Nagel, and her daughter, Barbara Klus. Ruth is survived by her sons, Steve (and Judy) of Sun Prairie, WI, Tim (and Teresa) of Morgantown, WV, and Tom, of Fairfax, VA, and by her brother, Joe Allman (and Summer) of North Fort Myers, FL. She is also survived by granddaughter, Holly (Klus) McClellan (and Andrew), grandson, Will Shields (and Alisha), and great-granddaughters, Cameron, Caroline, and Casey McClellan, and Riley Shields. A family service to honor Ruth's passing will be held in June at East Maplewood Cemetery.

Ruth Ann (Klus) DeHart, 95, formerly of Anderson, passed away in Fort Myers, Florida on January 2, 2021. Ruth was born in Anderson on September 18, 1925, to a very interesting family. Her father, Charles Allman was a well-known Anderson fireman... View Obituary & Service Information

The family of Ruth Ann (Klus) DeHart created this Life Tributes page to make it easy to share your memories.