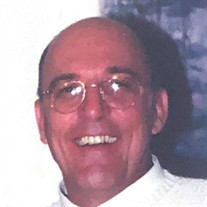 Howard “Scott” Norris passed away at home surrounded by family on Sept 6, 2021, following an extended illness. Born May 22, 1948, in Elwood, Indiana to Walter Scott and Lois Jean (Smith) Norris, he was a 1966 graduate of Wendell Willkie Senior High School. Scott studied Engineering Technology first at Tri-State University and then completed his studies at Indiana State University in 1970. While attending the university, Scott also began his work life as a co-op student at Guide Lamp in Anderson in the Plant Engineering department. Scott would remain a devoted employee of Guide Corporation, ultimately retiring as an Engineering Manager in 2006. A lifelong car enthusiast, Scott spent years restoring classic automobiles and attending car shows with his extended posse of car buddies. He always made friends wherever he went and was beloved for his crazy stories and infectious sense of humor. Scott spent his retirement years playing with his grandchildren, traveling the US with his wife and travel companions, Tim and Linda Linsmeyer of Elwood, hanging artwork for his daughter’s company, and taking on woodworking projects. Scott married his high school sweetheart, Nancy Lynn (Swisher) on March 7, 1970. After caring for Nancy through a protracted battle with cancer, they celebrated their 50th wedding anniversary with friends and family shortly before Nancy’s death on March 30, 2020. Scott is survived by his daughters Angela Lewis (Doug) and Amy Gentry (Mark) and his adored granddaughters, Allison and Mallory Gentry and Sierra (Brady) Lewis Tibbets and Lauren Lewis, all of Pendleton, as well as great-granddaughter, Tessa Marie Lewis. Scott leaves behind a sister, Nancy Norris Sanders (Rick) of Kokomo, and a brother Phil Norris (Stephanie) of Lake George, Utah. He is also survived by his Swisher family; father-in-law David Swisher of Alexandria; brother-in-law, Bob (Judy) Swisher, also of Alexandria; sisters-in-law, Lisa Swisher Dykhoff (David) of Muncie, Jayne Swisher Davis of Fishers, Julie Swisher Sautter (Rich) of Westfield and Loretta Swisher (Ron) of Frankton and many beloved nieces, nephews, cousins, and friends. In addition to Nancy, Scott was preceded in death by both of his parents, his mother-in-law, Joan Latchaw Swisher of Alexandria, brothers-in-law Gary Swisher (Margo) of Alexandria, and Ron Swisher (Loretta) of Frankton, and niece Kelsey Sautter of Indianapolis. Because Nancy’s funeral was prevented by Covid-19 restrictions, visitation and funeral services will be held in honor of both Scott and Nancy. Visitation will be from 2-6 pm on Sunday, Sept 12th, and 9 am on Monday, Sept 13th with funeral services following at 10 am at Loose Funeral Home, 200 W 53rd St in Anderson. The family would like to protect the health of all those attending. Please wear a mask. A brief graveside service will be held afterward at Grove Lawn Cemetery in Pendleton. As a tribute to Scott, the family encourages those with a classic car to join in the procession to the cemetery. In lieu of flowers, the family requests memorial donations can be made to Little Red Door Cancer Agency, www.littlereddoor.org , 1801 N Meridian St, Indianapolis, IN 46202. www.loosecares.com.

The family of Scott Norris created this Life Tributes page to make it easy to share your memories.

Howard “Scott” Norris passed away at home surrounded by family...

Send flowers to the Norris family.