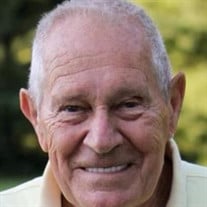 Spencer P. Judd, 95, Pendleton, passed away on January 1, 2022, at his home on Judd Lake. He was born on September 24, 1926, in Anderson, the son of Oran and Mary Alice (Bryant) Judd. Spencer proudly served in the U.S. Army in WW II. He was a member of the American Legion. He retired from Delco-Remy after 56 years of service. Spencer was preceded in death by his wife of 67 years, Alfretta Judd in 2012, his parents, his sister, June Freestone, his brothers, Forest Judd and Bert Judd, and his son-in-law, Mel Richardson. He is survived by his wife, Vicki Kay Stanford, Anderson; his children, Spencer L. Judd (Deborah), Anderson, Toby A. Benefiel (Gary), Anderson, and Marybeth Richardson, Lapel; and many grandchildren, great-grandchildren, and great-great-grandchildren. Private services were held with burial in Mendon Cemetery. www.loosecares.com.

The family of Spencer P. Judd created this Life Tributes page to make it easy to share your memories.

Send flowers to the Judd family.