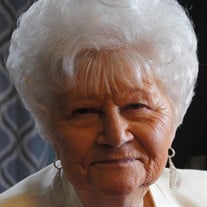 Susie Catherine Tilley, 96, closed her blind eyes for the last time November 12, and, simultaneously, opened her new eyes to the glory of Heaven. Born in Hobart, Kentucky, the second daughter to Virgil and Eunice (Pierce) Shelley. She was the wife of Joe Tilley for 62 years. She was first and foremost a caregiver to her family and close friends. Caring for others began when she was twelve, caring for her grandparents. When she got older, she followed her sister from Kentucky to Indiana. She found work at General Motors, and joined a mixed bowling league where she met and later married Joe Tilley. Later, they welcomed their daughter Barbara Jo, who survives her, along with grandsons Matthew (Kim) Mahoney and Rev. Mark (Beth) Mahoney, and great grandchildren Colten, Catherine, Liam, Lily and Kendrick. Also surviving are two nieces and four nephews, many great nieces and nephews and one great, great niece. Susie was preceded in death by both her parents; husband Joe; and sister Elsie Monzelle Lowhorn. She had many interests throughout her long life, including fishing with Joe and her grandsons, knitting, sewing, quilting, and vegetable and flower gardening. Her canned vegetables were always enjoyed by family and friends. She also volunteered at Community Hospital as a Pink Lady, and one of her famous quilts, made during the blizzard of '78, was donated to the Hospital Auxiliary raffle and brought in $1200 for the cause. Susie was a 60-year member of the Anderson and Lapel Order of Eastern Star in which she held several offices and honors, including District Deputy (1987-88), Grand Star Point Esther, Worthy Matron, and (her favorite) Chaplin. Susie attended for many years the Bethel United Methodist Church and was a self-taught pianist. After losing her eyesight, she kept her mind sharp by listening to many recorded books. She attended the Blind Support Group of Anderson monthly. Susie’s family would like to thank everyone who helped her in her last years, including, but not limited to the staff of Harter House. Visitation will be held on Thursday, November 18, 2021, at Loose Funeral Homes & Crematory, 200 West 53rd Street, Anderson, IN, 46013, from 4:00 p.m. until 8:00 p.m. Services will be at the funeral home on Friday, November 19, 2021, at 11:30 a.m. with Rev. Mark Mahoney officiating. Burial will take place at Anderson Memorial Park Cemetery. www.loosecares.com

Susie Catherine Tilley, 96, closed her blind eyes for the last time November 12, and, simultaneously, opened her new eyes to the glory of Heaven. Born in Hobart, Kentucky, the second daughter to Virgil and Eunice (Pierce) Shelley. She was the... View Obituary & Service Information

The family of Susie Catherine Tilley created this Life Tributes page to make it easy to share your memories.

Susie Catherine Tilley, 96, closed her blind eyes for the last...

Send flowers to the Tilley family.