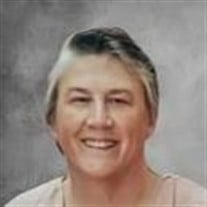 Tereasa Marie Menke passed away peacefully at her home in Edinburgh, IN on September 23, 2021. Born June 15, 1968, in Thief River Falls, MN, the daughter of Dorothy Holden and the late Robert Yehle. Tereasa was a 1986 graduate of Virgin River High School, Mesquite, NV. She then joined the Army in 1986, proudly serving her country for 20 years with a deployment to Bosnia in 2002. Following her retirement in 2006, she was awarded The Meritorious Service Medal and Army Commendation Medal. Tereasa met her beloved husband, Edward J. Menke, while stationed in Fort Carson, CO and the two married on September 7, 1993. The two raised their family in Mililani, HI while stationed at Schofield Barracks. Upon her husband’s retirement in 2008, they relocated to his home state of Indiana. They spent 10 years in Fishers, IN, and recently moved into their dream retirement home in Edinburgh, IN. Her dream was to travel around the United States visiting her children and grandchildren, while also going to national parks, NASCAR tracks, and baseball parks in their recently purchased RV. She was an avid sports fan and filled her free time watching the Cincinnati Reds, Denver Broncos, Indianapolis Colts, and the Indianapolis Pacers & Fever. She loved spending time with her husband in a weekly couples bowling league and adored her many animals including Maui, Vinny, Koa, Smokey, and Lilo. She was preceded in death by her father Robert “Bob” Yehle and her grandparents Gerald and Doris Williamson. She is survived by her husband, Edward J. Menke of Edinburgh, IN; Daughters, Meggin Linquist of Reno, NV, Rachyl Menke of Crothersville, IN, Kaylah Menke of Fort Myers, FL; Son, Sterling (Dayna) Menke of Goodyear, AZ; Grandsons, Elijah, Jordan “JoJo”, Nolan Linquist of Reno, NV and Levi Waymire of Crothersville, IN; Granddaughter Lillian Menke of Fort Myers, FL; Mother, Dorothy Holden of Grand Junction, CO; Brother William (Gaby) Holden of Killeen, TX. The family will host a viewing Tuesday, September 28th at the Loose Funeral Home & Crematory from 6:00 to 8:00 pm. It is requested those that who wish to attend the viewing wear their favorite sports jersey/shirt. Her funeral service will occur Wednesday, September 29th at the same location from 1:00 to 1:30 PM with burial to follow at Anderson Memorial Park. In hopes of spreading our love of fellow veterans and service members, we ask that in lieu of flowers, donations be sent to the Indiana Chapter of Wish for our heroes in Tereasa’s name at www.wishforourheroes.org

Tereasa Marie Menke passed away peacefully at her home in Edinburgh, IN on September 23, 2021. Born June 15, 1968, in Thief River Falls, MN, the daughter of Dorothy Holden and the late Robert Yehle. Tereasa was a 1986 graduate of Virgin River... View Obituary & Service Information

The family of Tereasa Marie Menke created this Life Tributes page to make it easy to share your memories.

Tereasa Marie Menke passed away peacefully at her home in Edinburgh,...

Send flowers to the Menke family.