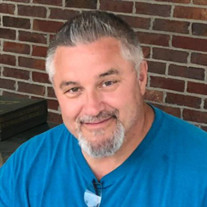 Thomas Alvin Looper, age 58, of Anderson, Indiana, went to be with the Lord on November 29, 2021, at Community Hospital in Anderson, IN. He was born October 2, 1963, in Anderson, Indiana, to the late Billy Lee and Minnie J. (Short) Looper. Tom attended Valley Grove Free Will Baptist Church, and prior to that was a member of the East 38th Street Free Will Baptist Church. Tom was a 1982 graduate of Pendleton Heights High School and was currently employed by Keihin-Astemo Hitachi. Tom had such a generous and loving heart and a personality to match. He enjoyed singing and playing his upright bass, spending time with his grandchildren, deer hunting, loved vintage Volkswagons, taking trips to Tennessee, and going to bluegrass shows. The short time Tom had on this earth, he created such a legacy. He will be greatly missed by his family and friends. He is survived by his loving wife, Brenda Looper; son: Cody Looper and his wife Heylee; daughter: Emily Cruz and her husband Jesus; four grandchildren: Jade, Ava, Minnie, and Emory; sister: Teresa Gosser and her husband Tom; brothers: Larry Looper and his wife Teresa, Scott Looper and his wife Sheila. In addition to his parents, he was preceded in death by his sister: Sandra Lee Dennis; son: Seth Looper; and father-in-law; Richard Bilbrey. Funeral services will be held for Tom on Thursday, December 2, 2021, at Robert D. Loose Funeral Home at 1:00 pm with burial to follow in the Anderson Memorial Park Cemetery. The family will welcome friends at the funeral home starting at 11:00 am until the time of the service. Officiating with the service will be Pastor Joe Prewitt. www.loosecares.com.

The family of Thomas Alvin Looper created this Life Tributes page to make it easy to share your memories.

Thomas Alvin Looper, age 58, of Anderson, Indiana, went to be...

Send flowers to the Looper family.