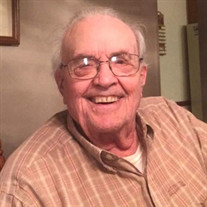 Vernon Lee Wheeler, 91, Anderson, passed away on Tuesday, August 17, 2021, following an extended illness. He was born May 4, 1930, in Senath, Missouri, the son of Elzie and Virdia Wheeler. Vernon proudly served his country in the United States Army during the Korean War. He retired after many years at Western Electric. Vernon loved the St. Louis Cardinals and Major League Baseball in general. He enjoyed spending time with his family. Vernon served the Lord with all his heart. He was a member of The First Pentecostal Church of Anderson. His love for the Lord was evident when friends, family, and ministers would stop by to pray with him. Vernon immediately started praising and worshipping the Lord. Vernon is survived by his wife of 32 years, Rebecca M. Wheeler, of Anderson; son, David (Marlene) Wheeler, of Anderson; daughter, Verna (Jesse) Flynn, of New Castle; step-son, Michael Monday, of Anderson; step-daughter, Marla Monday, of Anderson; also surviving are his brothers, Donald Wheeler of Ingalls, Joe Wheeler of Kennett, Missouri, sister, Brenda Mize of Greenfield; 12 grandchildren, 14 great-grandchildren, and three great-great-grandchildren. He was preceded in death by his first wife of 37 years, Edith Opal Wheeler; sisters, Donna Jean Wheeler and Barbara Ann Wheeler; daughter in law, Tia Lynn Monday; and grandson, Gage Monday. Visitation will be held at Loose Funeral Homes & Crematory, 200 West 53rd Street, Anderson, IN, 46013, on Sunday, August 22, 2021, from 2:00 p.m. until 6:00 p.m. Services will be held at the funeral home on Monday, August 23, 2021, at 1:00 p.m. with Brother Jedidiah Henson officiating. Burial will be at Park Cemetery, Greenfield. www.loosecares.com.

Vernon Lee Wheeler, 91, Anderson, passed away on Tuesday, August 17, 2021, following an extended illness. He was born May 4, 1930, in Senath, Missouri, the son of Elzie and Virdia Wheeler. Vernon proudly served his country in the United... View Obituary & Service Information

The family of Vernon Lee Wheeler created this Life Tributes page to make it easy to share your memories.

Send flowers to the Wheeler family.