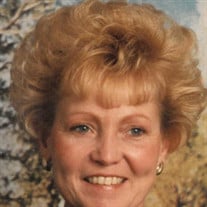 Vicki L. Brooks, 75, of Anderson, passed away on January 22, 2022. She was born on October 8, 1946, in Anderson to Joe and Zelda (Zell) Staley, Jr. Vicki was a 1964 graduate of Madison Heights High School. In 1995 she received her LPN certificate. She was active in Beta Sigma Phi for over 50 years. Vicki loved her family and was very close to them. She watched her great-grandchildren daily. Vicki was preceded in death by her parents, her brother, Ward Staley, and her nephew, Michael Sweet. She is survived by her husband of 57 years, Joe Brooks, Anderson; her daughter, Sandra Ellerman, Anderson; her son, Jody Brooks, Anderson; her granddaughters, Kayla Knotts (Tyler), Anderson, and Kilynne Brooks, Middletown; her grandson, Cameron Ellerman (Tabitha Dillon), Anderson; and her six great-grandchildren, Jaxson, Aliah, Asher, Raidyn, Camden, and Elliot; her sister, Pamela Sweet (Danny), Anderson; her brother, Tim Staley (Addy), Lebanon, IN; and numerous nieces and nephews. Funeral services will be on Wednesday, January 26, 2022, at 1:00 P.M. at Loose Funeral Homes & Crematory, 200 W. 53rd Street, Anderson. Visitation will be from 11:00 A.M. - 1:00 P.M. Burial will be in East Maplewood Cemetery. Condolences may be shared with the Brooks family online at www.loosecares.com.

The family of Vicki L. Brooks created this Life Tributes page to make it easy to share your memories.

Send flowers to the Brooks family.