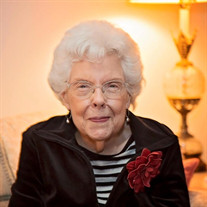 Wanda “Jeanne” McKnight, 99, passed away peacefully on April 26, 2021. She leaves a tremendous void in all of our hearts. Born August 30, 1921, in New Castle, Indiana, she was a proud resident of Anderson for most of her life. Those who knew Jeanne were captivated by her caring spirit and radiant glow. She was a resilient, wise, and hard-working woman who carried a soft presence and loving eminence. She was truly an inspiration to those around her. Jeanne married her soulmate and New Castle High School sweetheart, Paul Edward McKnight, on April 18, 1943, in Anderson. Together, they raised two wonderful children and built a beautiful home, in which she still resided. They were the quintessential pair, feeding off each other’s differences and deep love for one another. She enjoyed cooking everything he grew in the garden, and he relished every meal as though it were the best he ever had. In addition to being a devoted homemaker, Jeanne held several jobs during her long life. After graduating from high school, she attended business school in Anderson. Her first job was painting Easter eggs for the window display at JCPenney in downtown Anderson, followed by a position at Woolworth’s. She later worked in the insurance department at Delco Remy for many years, as well as Cook Block & Brick. During retirement, Jeanne was an active member of the “Golden Girls” women’s club, which met monthly at various locations for over 30 years. She was a talented seamstress and crafter, a crossword aficionado, and an admiring cat lover. She was an impeccable dresser, and her snowy white hair was always perfectly styled. Jeanne was an extraordinary mother, grandmother, sister, aunt, and friend. She always took time to engage in meaningful conversation, and she held relationships close to her heart. Jeanne was preceded in death by her loving husband Paul, daughter Michelle “Shelly” Lee McKnight, sister Maxine Cook, brother Robert “Bob” Breese Morse, brother-in-law Virgil E. Cook, parents Artie Ray Futrell and Lee Madison Morse, nieces Natalie Cook Campbell and Melanie Morse-Dawson, and many other dear relatives and friends. She is survived by her son, Mike McKnight (Cindy McKnight); grandson Gregory McKnight; granddaughters Jenna McKnight (Brant Coletta), Jamie Costlow (Wes Costlow), and Cassie Yriarte; great-granddaughter Leah Costlow; great-grandson Lil’ Nugget (due June 12, 2021); former daughter-in-law Julie McKnight (Rick Lovell); and many incredible nieces and nephews. A celebration of this amazing woman will be held at Loose Funeral Homes & Crematory on Saturday, May 8. Visitation will be at 11 a.m., followed by a service at 1 p.m. Online condolences can be shared at LooseCares.com.

The family of Wanda "Jeanne" McKnight created this Life Tributes page to make it easy to share your memories.

Send flowers to the McKnight family.